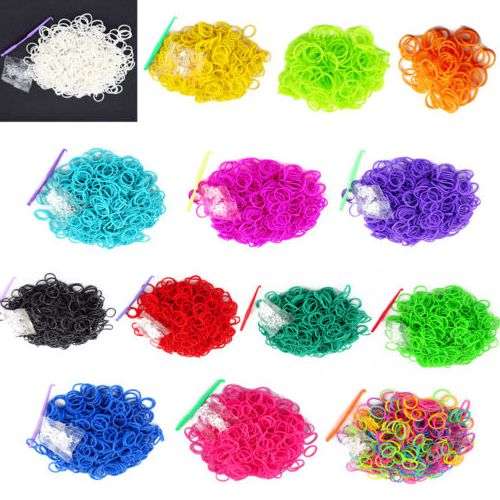 A bracelet is a piece of jewelry worn by almost all people, regardless of gender or age. A beautiful ring on the hand will add zest to any look, so it has been popular since ancient times. Today there are new materials for making jewelry – Rainbow Loom Bands rubber bands. Now bracelets can be made not only by experienced craftsmen, but also by schoolchildren. In this article, you will learn 5 ways to make rubber bracelets.

Everyone knows that such jewelry as rings, earrings, necklaces appeared in antiquity, at the same time the first bracelets were made. In ancient times, people were very superstitious, so all jewelry had a magical meaning. Bracelets sometimes could indicate that a person belongs to a certain tribe, religion, or has a certain position or status in his society.

Much time has passed and today the attitude of people towards bracelets has changed significantly. Now they are a common decoration that allows a person to stand out from the crowd and distinguish themselves with their personality. Modern craftsmen have learned how to make bracelets from different materials and turn them into real works of art. Children love bracelets too, so they try to make them with whatever materials are available to them. We can say that it was thanks to children’s imagination and the guidance of adults that such a direction of needlework as weaving bracelets from rubber bands appeared..

The word “bracelet” itself comes from the French word bracelet, which means “wrist”. The bracelet is shaped like a closed ring. Jewelers make this jewelry from metals by casting or joining chain links, and children weave from threads, ribbons or elastic bands. 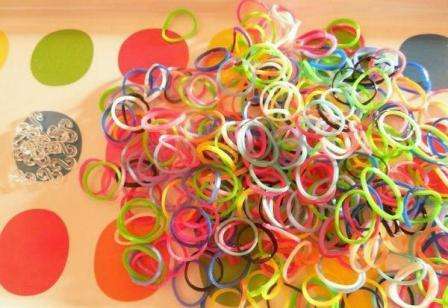 Weaving bracelets is similar to knitting with threads, only different elements can perform the function of knitting needles: pencils, forks, slingshot, looms, or even your own fingers. Weaving materials are alternated according to colors or other characteristics. If the bracelet is intended for a boy, then the classic style of weaving and blue, black or white materials are often used. A hand-made bracelet will be a good gift for a friend or girlfriend, so do not spare your time and try to master the basics of weaving. 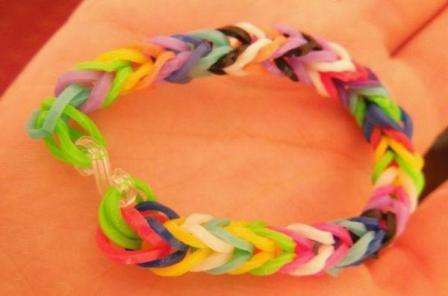 A DIY bracelet will be a good gift

Method number 1. Iris on the fingers

Fishtail is the easiest way to weave elastic bracelets. It is not necessary to buy whole sets of LoomBands for this, since it will be enough to purchase only elastic bands and take a crochet hook. 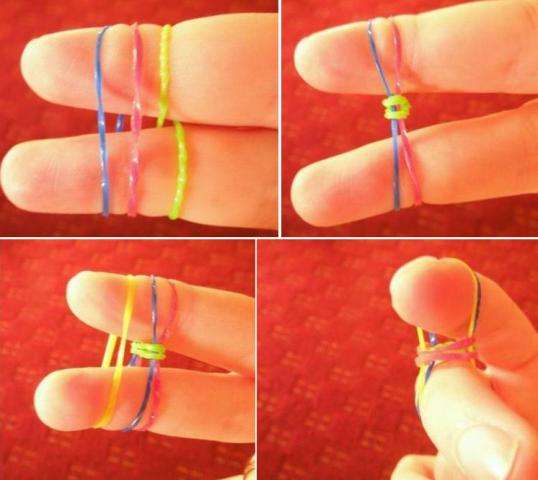 Weaving method with elastic bands: irises on the fingers

To weave a fishtail you will have to spend about 60 elastic bands, it all depends on the width of the wrist. If you are right-handed, pull the rubber bands over your left hand, middle and index fingers. First, one elastic band is twisted by a figure eight and so is put on two fingers. After that, two more elastic bands are worn on top without twisting.. 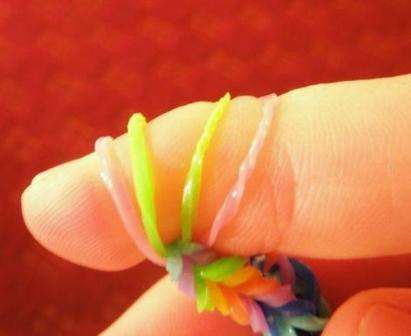 Now you can grab the crochet hook and fold the bottom elastic over your fingers, or do the same with your free hand. Slip the elastic over two fingers again in the usual way, throw the lower one over the top. Repeat putting on and off the rubber bands until the piece is the right size for your hand. You can alternate the colors of the elastic bands in any order.. 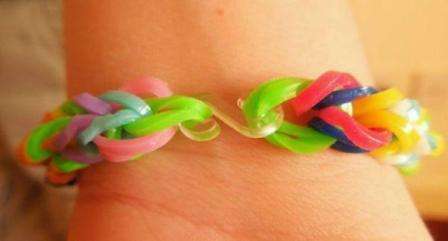 Simple bracelet made of rubber bands on the fingers

To finish weaving, you need to throw the elastic bands all over one finger, there should be 4 rings on the finger.

Video: a method of weaving a bracelet from elastic bands without a machine on the fingers

Throw the bottom elastic over your finger so that there are two elastic bands, and put on the hook-clasp. The decoration is ready!

Method number 2. Weaving a rainbow bracelet on a fork 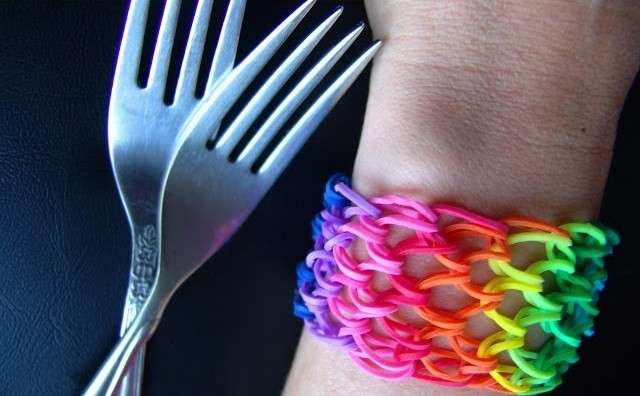 Every home has a fork, so Loom Bands have turned their cutlery into a loom. Even without special skills, you can master the basics of this weaving on a fork. You will need about 100-120 elastic bands and a plastic hook-fastener.

Method of weaving a bracelet from rubber bands on forks

Take an elastic band, twist it with a figure eight and put it on the middle teeth. Since the tines of the fork are narrow, you need to fold the elastic in half. Fold the next rubber bands in half and put them on the outer teeth of the fork without twisting. After that, the lower double loops are thrown over the teeth and the elastic bands are put on again on the sides. To finish weaving, you need to transfer the rubber bands from the side teeth to the middle ones, throw the lower loops over the top, and then put two double loops on the hook.

No. 3 Ways of weaving from rubber bands on a special machine

The Dragon Scale bracelet is very beautiful as it is much wider than the Fishtail bracelet. It is best done on a professional machine, on which the rows are removed or moved. Weaving begins with the fact that eights are put on elastic bands on eight columns, and then eights need to be put on between these columns.

Repeat braiding until the band of the bracelet reaches the desired size. When the bracelet is almost ready, you need to put on one elastic band on the outer four columns and throw loops over it from other columns.

Simple bracelet on the machine

To complete the weaving from the extreme column, you need to transfer the elastic to the second column, and throw the lower ones. Then, from the second column, transfer to the outer elastic bands. The same thing needs to be repeated on the other side. Two loops can be removed from the machine and put on a hook-fastener.

Method number 4. Weaving on a slingshot

Do not think that only an elementary Fishtail bracelet can be made on a slingshot, you will even be able to weave the Sidewalk. To do this, take two elastic bands, twist them with an eight. After that, two elastic bands of a different color are taken and thrown on top without twisting.

Weaving on a slingshot bracelet TROTOIRE

How to weave bracelets from elastic bands, the TROTOIRE method

Method number 5. How to make a pencil bracelet

Rainbow Loom rubber bands became so popular that they began to use not only forks, fingers and looms, but also ordinary pencils for weaving. Try to weave bracelets using the Bicycle Chain technique on pencils. Between two new identical pencils, a square or rectangular rubber band is clamped and wrapped with tape. The first elastic band needs to be twisted with an eight and put on pencils. After that, another elastic band is twisted in half and put on one pencil.

Weaving a bracelet on pencils

After watching a step-by-step video on how to make do-it-yourself rubber bracelets, you will see that this is quite simple to do. Elastic bracelets are a creative accessory and good leisure for children and adults.