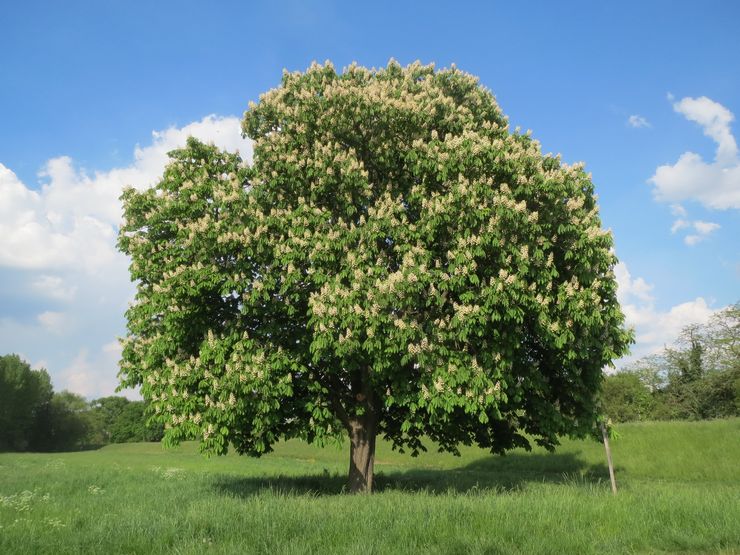 The chestnut plant (Castanea) is a tree from the Beech family. The genus is known for its beautiful crown and many species of edible fruits that are very rich in nutrients. Chestnut wood is also valuable, suitable for various jobs..

The genus of chestnut includes 14 species that live in different parts of the northern hemisphere. Sometimes the word “chestnut” refers to other plants. Among them are the chestnut seed (a representative of the legume family) and the horse chestnut (from the Sapindov family). The fruits of all these trees have a similar shape, while the horse chestnut got its name from the fact that its “nuts” are inedible.

Chestnuts are found in both Eurasia and North America. These trees prefer moderate warmth and humid climates and can also grow in the mountains. Chestnuts can be found in the south of many European countries, they are also loved in Asia – in China, Korea and Japan. In Russia, chestnuts grow in the regions of the Caucasus and on the Black Sea coast.

Frequent neighbors of the chestnut are its relatives – beeches, as well as hornbeams, pines and other conifers.. 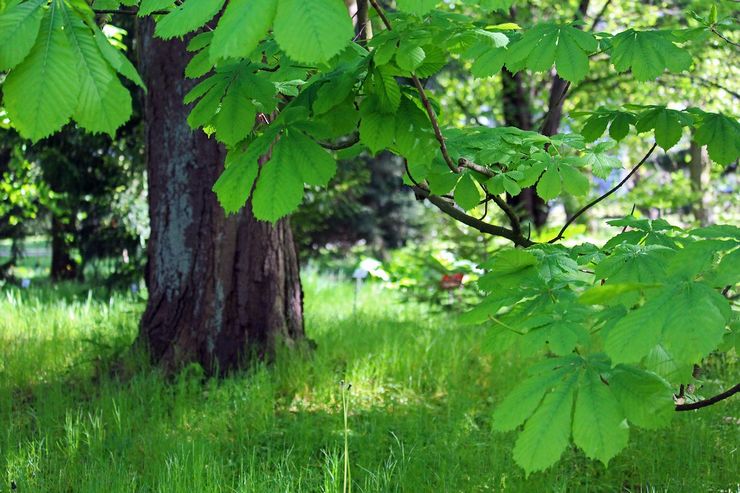 Chestnuts are large trees with a wide spreading crown. Their height can reach 40 m. A grooved bark covers the trunk up to 2 m in girth. The branches are reddish brown. Rich green oblong foliage 8-25 cm long grows on them. Leathery leaf blades are pointed towards the top. The root system includes several large roots that provide the tree with good stability, but their depth is not too high. Because of this feature, chestnuts are sometimes planted over cellars. Such plants are considered long-livers and in natural conditions are able to live for more than 500 years, although the average age of trees in forests reaches 100 years..

Chestnut blossoms begin in May. During this period, erect inflorescences-spikelets appear on it, consisting of many small flowers, hardly noticeable among the foliage. During the flowering period, you can especially quickly distinguish a real chestnut from a horse. The latter has larger and more spectacular white-pink inflorescences, exuding a pleasant aroma. There are other differences in plants – for example, the foliage of the horse chestnut has a finger-like structure and notches along the edges. Edible chestnuts have smooth leaf edges..

Chestnut flowers are pollinated by insects or wind. After that, glossy fruit-nuts are tied on the plant. They are located in a special spherical plush, characteristic of the beech species. The cupula is green, covered with many hard needles and opens after the fruit is fully ripe. The Latin name of the plant, Castanea, is associated precisely with the structure of its fruits and refers to the myth of the chaste nymph Her, who did not succumb to the courtship of Jupiter. The nuts themselves are brown in color and are considered edible in most species. In many countries, they are used for baking bread, as well as preparing other dishes..

Chestnut seeds can also be eaten after some processing, but horse chestnut seeds are considered inedible, despite their great resemblance to ordinary chestnuts. They have a bitter taste, and their use can lead to severe poisoning. The shell of such “chestnuts” has more rare spines and is also colored green. But, despite the inedibility of seeds, horse chestnut is also considered a good honey plant..

EDIBLE CHESTNUT – delicious exotic in the garden! Will grow with you! 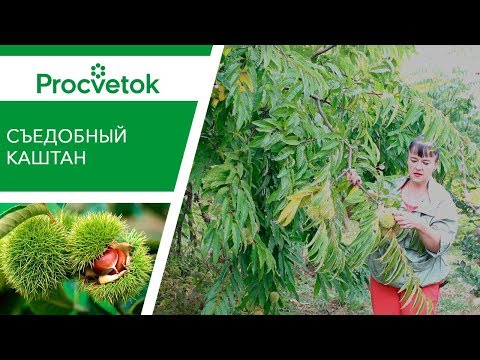 Planting and caring for chestnuts 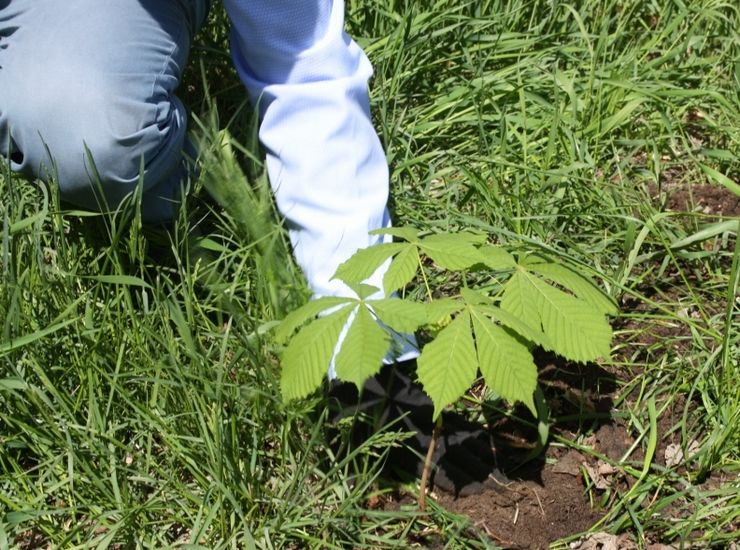 Chestnuts grow best in sunny or slightly shaded areas with good air movement. The moisture content of the soil should be medium. Drained soils that are “breathable” and do not retain moisture are preferred. But overdrying the land can have a bad effect on the health of the plantings, as well as its swampiness. Too alkaline soils for chestnut are not suitable, in nature it grows on loamy forest soil.

When choosing a place for a chestnut seedling, one should take into account the pace of its development and further growth. Leave at least 5 m of free space around such a plant. For planting, seedlings are selected with an age of 1-2 years. It is during this period that plants will best be able to take root in a new place..

Before planting, a hole is prepared for a tree about half a meter wide and deep. A drainage layer of brick chips, pebbles or rubble is laid at the bottom. The soil remaining after the preparation of the pit is mixed with humus and sand. It is recommended to add dolomite flour (about 0.5 kg) to the resulting mixture. The hole is poured with water, and then a seedling is installed in it, without deepening its root collar below ground level. At the same time, a support is installed in the pit, which will support the fragile chestnut. The remaining voids are covered with earth, carefully tamped, and then watered again. If necessary, add more soil mixture to the pit.. 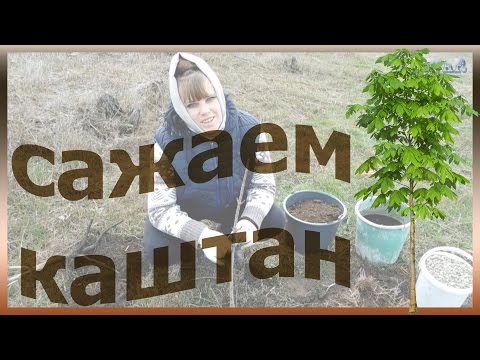 Young seedlings need systematic care – watering and a little loosening of the trunk circle several times over the summer. Older plants will need to be watered only in extreme heat. In late autumn, it is recommended to mulch the area near the trunk with bark, peat, grass or sawdust. Young chestnuts are more sensitive to frost, so sometimes their trunk is additionally wrapped in burlap. In the spring, the trees are fed by adding manure or a complex mineral composition to the soil. 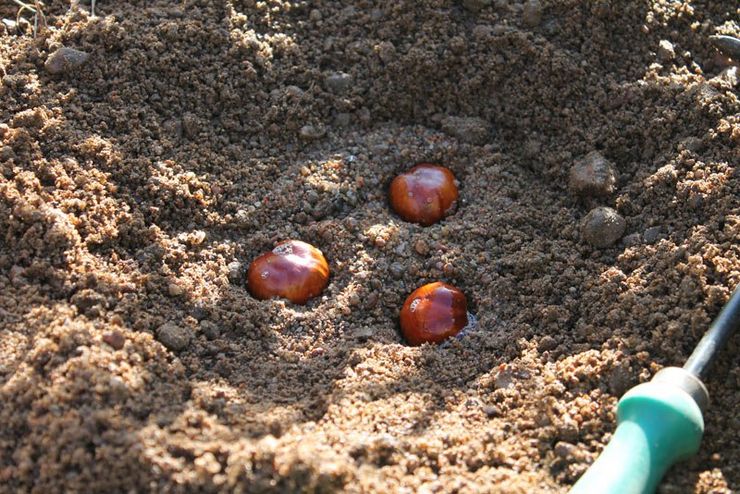 A chestnut can be grown from a nut – this is how it multiplies in nature. Fruits begin to bear trees over 15 years old. They should be collected only after complete ripening. Its timing varies depending on the species and variety, but usually the harvest takes place in the first half of autumn. Nuts do not appear every year, but in waves, once every 2-3 years. After the fruits fall to the ground, they are harvested, the ripe intact chestnuts are selected and immediately planted in the ground. The planting depth is 5-7 cm.The seedling bed is covered with a layer of foliage.

You can plant nuts in spring, but this will require stratification. The chestnuts harvested in the fall are placed in a container with sand and placed in a cool (about 4 degrees) place. A week before the future planting, the chestnuts are pulled out and soaked in water, periodically replacing it.

Fresh nuts germinate well. For a year, the plant that has developed from them will grow by about 30 cm.In the 5th year of its life, its height can be several meters. If you plan to replant chestnuts seedlings, it is advisable to do this before the tree is 2 years old..

In addition to the fruits for breeding chestnuts, you can use their cuttings, layering, as well as offspring that appear near the stump. 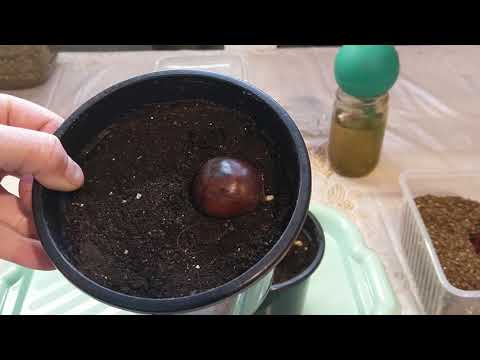 The number of chestnuts is significantly influenced by many diseases and pests. Not all such plants are resistant to them. The most dangerous for chestnuts are:

Sometimes chestnuts begin to ache due to violation of agricultural rules or poorly selected growing area. For example, frequent stagnation of water in the ground can also lead to the appearance of fungal infections. It is not worth starting the disease. In the USA, due to the accidentally imported fungus Endonia parasitica, the number of toothed chestnuts has decreased by almost 95%.

A chestnut affected by a fungal disease must be treated with a fungicide and copper sulfate. All affected parts of the bark and branches are removed, and the sections are lubricated with special agents and putty. Aphids, scale insects, as well as weevils, nutwigs and miner moths are also capable of damaging. Insecticides are used against insects. But it should be remembered that chestnut is a fruit tree, therefore, all chemical preparations are used strictly according to the instructions and at certain periods for this..

Preventive care can help prevent pests or diseases. The trees are regularly inspected, if necessary, they carry out sanitary pruning, cover up the wounds and splits with pitch, and the foliage-mulch is treated with fungicides.

Types of chestnut with photo

Of the 14 types of chestnut in Russia, only three can be found. 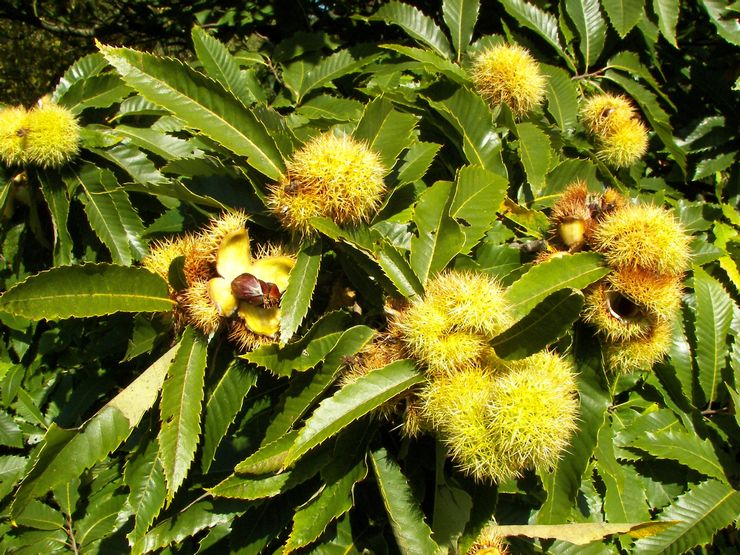 The most common type. Castanea sativa is a large tree that grows at a fast pace and is easy to care for. Its height reaches 35-40 m. The most lush crown is formed in lonely trees – in forest areas or in the vicinity of other plants, it has a more compact appearance. Lanceolate foliage is bright green in summer and turns yellow by autumn. 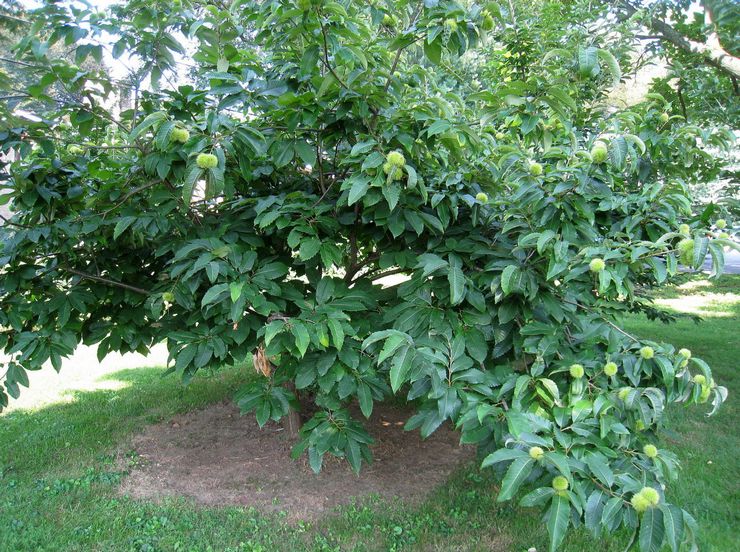 A 30-meter tree has a spherical crown. Castanea dentata is considered a more frost-resistant species, it is able to withstand cold temperatures down to -37 degrees. The chestnuts of such a plant are usually small in size, but they are sweet and are most often used in cooking. Flowering occurs in July. 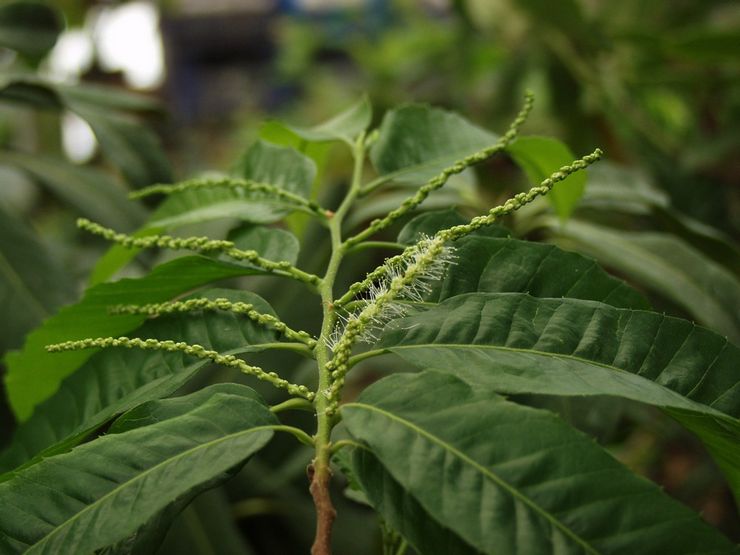 Shorter, 15-meter chestnut. Castanea crenata has burgundy-brown twigs and forms large nuts. This species develops best in regions with a mild climate. Despite the relative thermophilicity (withstands frosts down to -20 degrees), it is considered especially resistant to fungal infections. Due to its especially rapid growth, it begins to bear fruit already from the 3rd year of life. The most popular forms are Pendula Miyoshi with drooping branches and Edilus Nakai with large and tasty fruits. Nuts of cultivated forms of this species are record holders in size. They are considered highly nutritious and can be eaten both fresh and after various processing.. 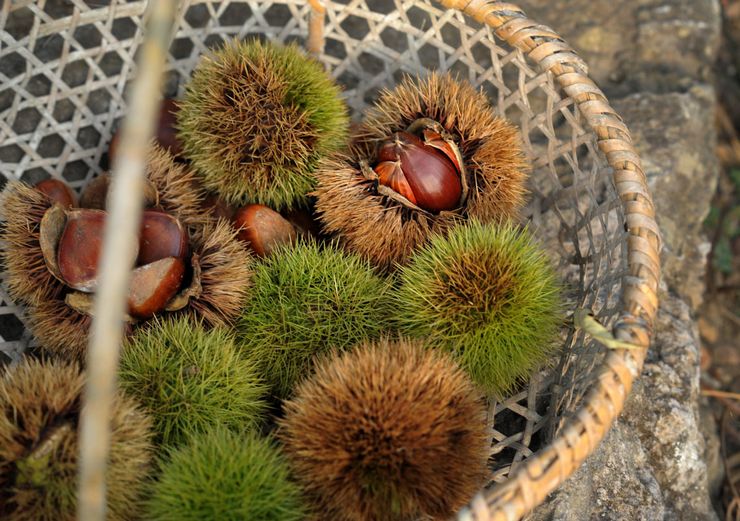 In structure, chestnut wood resembles oak, but is considered less durable. It is easy enough to process it. Items made from chestnut keep their shape well and are considered to be resistant to decay. Due to its beautiful texture, wood is most often used for decoration work, as well as for the manufacture of furniture. In addition, the chestnut can be used in other areas: for example, in the manufacture of barrels for winemaking, as well as in shipbuilding. In the recent past, telegraph poles were made from chestnut trunks. But since 2012, it is forbidden to harvest chestnut wood by the order of the Rosselkhoz.

Chestnut fruit is also one of the common reasons for its cultivation. They taste good and contain many valuable elements. Chestnuts contain vitamins, tannins, as well as carbohydrates and proteins. The minerals they contain include magnesium, phosphorus and potassium. Although chestnuts are nuts, they are considered to be less fatty, but not inferior to other nuts in nutritional value. They can be eaten in different forms: they are fried, baked, boiled, and also used as an additive for flour. While chestnuts can be eaten raw, peeling them is difficult and cooking improves the flavor. However, raw or steamed nuts are considered healthier. 1 hectare of chestnut plantings yield up to 1 ton of fruit. It is noteworthy that trees are beneficial not only during fruiting, but also during flowering: plants are considered melliferous plants. Chestnut honey has a tart flavor and is considered one of the healthiest.

Various parts of the plant are used for domestic needs, as well as for cosmetic and medicinal purposes. For example, chestnut flour can starch and bleach fabrics. Traditional medicine also uses chestnut bark, which is rich in tannins.. 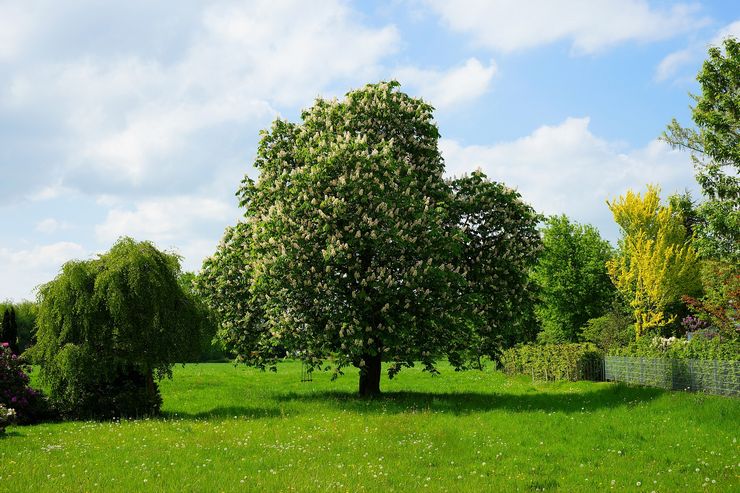 Most often, the namesake of the sowing chestnut – horse chestnut – is used for decorative purposes. It attracts with its beautiful foliage resembling a fan, a neat crown and fragrant inflorescences that look like lush vertical pyramids. Such plants are often used to decorate city parks, alleys and recreation areas..

Although the sowing chestnut is inferior to the horse chestnut in decorativeness, it can also be used to decorate a garden or park. Most often, such plants are used in group plantings. They go well with conifers, acacias and birches. For the purposes of landscape design, Japanese chestnut is also used. These trees can form hedges..

Due to the high growth of an adult chestnut in ordinary garden plots, such plants are rare, but sometimes undersized forms of chestnuts are grown in gardens..