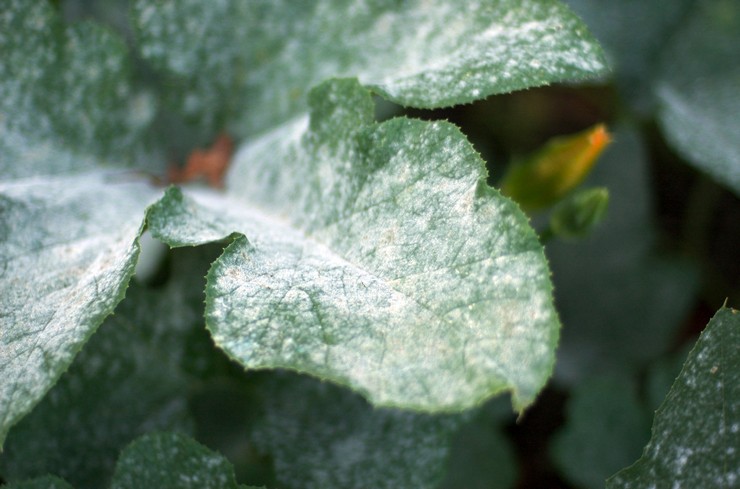 White bloom on the leaves of garden or indoor plants does not just spoil the appearance, it is also a sign of some kind of disease. It will be possible to get rid of this plaque only if the reason for its appearance is correctly determined. And there may be several reasons.

Most often, plants are infected with this fungal disease, which causes the appearance of white bloom. To confirm the diagnosis, lightly rub the surface of the leaf. If it is powdery mildew, then small pellets of very small filaments of the mycelium will remain on the fingers. It is recommended to fight a fungus from the powdery mildew family with sulfur-based fungicides or proven folk remedies and recipes.

Downy mildew signs are yellow spots on the upper side of the leaf and bloom of a gray-purple hue, as well as white bloom on the underside of the leaf plate. Copper preparations will help get rid of this disease..

Mold on plant leaves is a fungal disease that appears most often from repeated excessive moisture of the soil during watering, frequent and abundant spraying, as well as high humidity in a room with indoor flowers. Mold is a fibrous or woolen-looking formation on the surface of sheet plates that resembles a small layer of dust. The fungus develops very quickly and is capable of destroying the entire plant in a short time. That is why it is necessary to take urgent measures to destroy it. At the initial stage, all damaged leaves are removed and the culture is treated with antifungal agents. 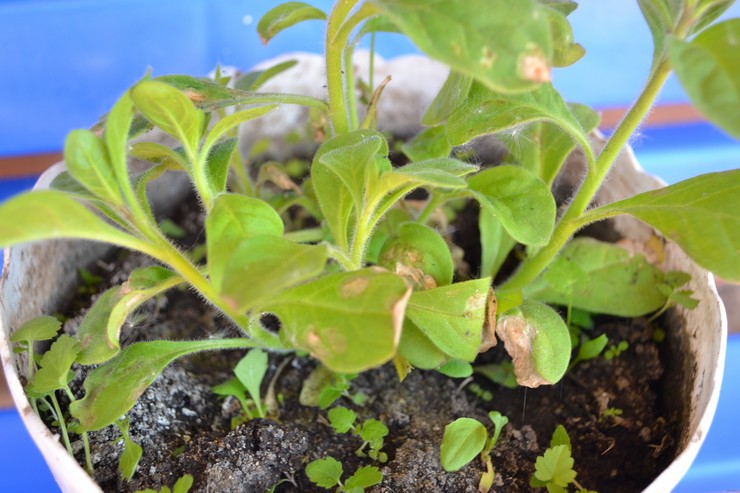 When this fungal disease appears on the leaves, stems and petioles, a fluffy coating of a gray tint appears, which eventually turns into rot. Gray rot can destroy a flower completely in a short time. It is very important to notice its first signs and immediately move the plant away from other specimens. If half of the plant or most of it is infected, then it will have to be destroyed, since there is no cure for this disease yet..

Fungal diseases appear where all conditions are created for them. It is very important to remember that when growing indoor plants, you must not violate the basic rules of care and maintenance. For example, you need to strictly observe the frequency and volume of watering, regularly ventilate the room. You can not put flower pots with plants very close to each other, they need free air passage.

Plaque of black, red and other colors

It happens that raids of red, black and various other shades appear on indoor plants. They all signal the appearance of some kind of health problem..

Rust – a fungal disease, the signs of which are plaque on the back of the leaf surface of a yellow, orange or brown hue. After a while, the leaves covered with such a bloom dry out. Rust appears in a damp, cool room with a temperature of 10 to 20 degrees Celsius and a high level of humidity. Experienced growers recommend first stopping the growth of the fungus with high temperatures. To do this, cover the flower with a dense plastic bag and place it near a battery or heating device. And then for a month to carry out the treatment with fungicides once a week. During the “treatment” period, it is not recommended to spray the flowers with plain water, as it is an excellent place for spores to ripen..

Black bloom – a fungal disease that most often affects palm and citrus crops, as well as camellias and azaleas. Black sooty mushrooms like to settle on a sticky leafy surface, which becomes so from the presence of harmful insects (for example, worms, thrips and aphids). The upper and lower parts of the leaf plate seem to be sprinkled with black powder or covered with a thin black crust, which prevent the flower from breathing and fully developing. Photosynthesis is also slowed down.

To restore the decorativeness of indoor crops and return them to a healthy appearance is possible only by completely destroying the pests. After all, it is the parasitic insects that leave traces of their vital activity on the leaves, which attract the fungus with their sticky structure. Such a sweetish bloom becomes an excellent breeding ground for a dangerous fungus. When the pests are gone, each leaf should be washed with a soft sponge dipped in warm water. 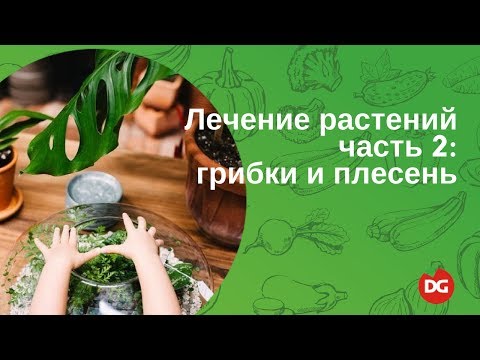