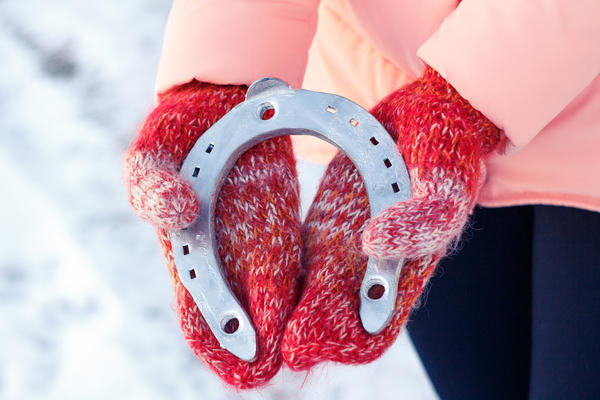 Christmastide is an amazing time between Epiphany and Christmas Eve. These days are filled with faith in miracles and magic. During this period, ancient paganism and Christianity are intertwined in an amazing way. They give us hope for the help of higher powers.

Long ago in Russia, with the advent of Christmastide, they began to celebrate the Nativity of Christ, they began to carol, guess, and make various amulets. People believed that the manufactured gizmos were capable of protecting people from various evil forces and misfortunes. People did these things on Christmastide days. In this case, the amulets are endowed with tremendous power and can serve their master all year round..

The amulet figure made during Christmas time will be able to protect against evil forces all year round. Now we will try to make a small miracle with you ourselves – today we will make some interesting amulet for our relatives or personally for ourselves.

A doll is not only a toy

So, Christmas time is approaching, so we are already starting to make crafts today. Let’s start our production with dolls. Since ancient times, our ancestors have made them very skillfully, believing in their power and strong influence on the fate of man. Each doll made had its own name. The amulet was intended for various situations in life.

Making amulets-dolls is an old tradition of ancestors. But there are also general rules. So, for example, only women or girls could make amulets. All materials that went to the manufacture of amulets had to be natural:

The face of all dolls should remain white. This is what symbolizes the purity of a person’s thoughts, and also prevents evil forces from entering the amulet. You cannot use scissors when making a doll. The fabric was necessarily torn by hand. It is also forbidden to use needles in work. The clothes and the body of the doll were tied together, but in no case were they sewn together. And the most important thing is that you need to work in a great mood and wish only good to the person for whom the amulet doll is made.. 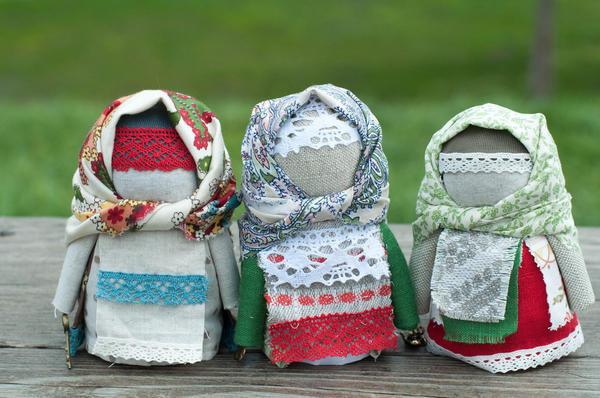 For example, the Doll is a Cubish. She acted as the guardian of health. Therefore, the doll was stuffed with various medicinal herbs. Such a doll was put to bed for an ailing adult or child and with all their hearts they wished a quick recovery. If you cannot believe in the power of these manipulations, then you can fill the doll with those herbs, the scent of which you like. Then you will have a great flavor.. 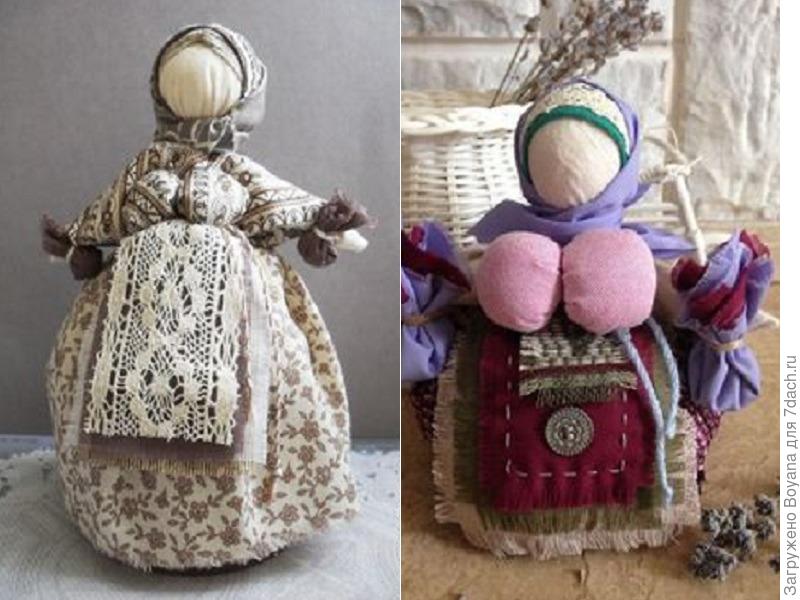 In addition, reeled dolls from linen threads were made for health. It was believed that flax can take away all diseases and completely heal a person.. 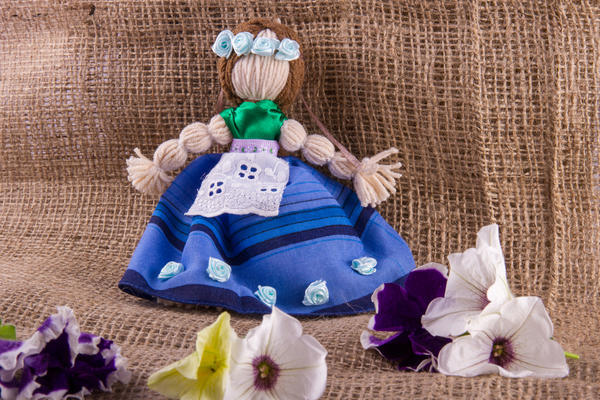 The role of the winter fever dolls is to attract or attract the spirit of the ailment that has flown into the house. Based on this, these amulets must have been memorable and very bright. They were made of sticks, which were wrapped in bright shreds from old worn clothes. These amulets were kept in a bunch and with the onset of spring days they were burned. 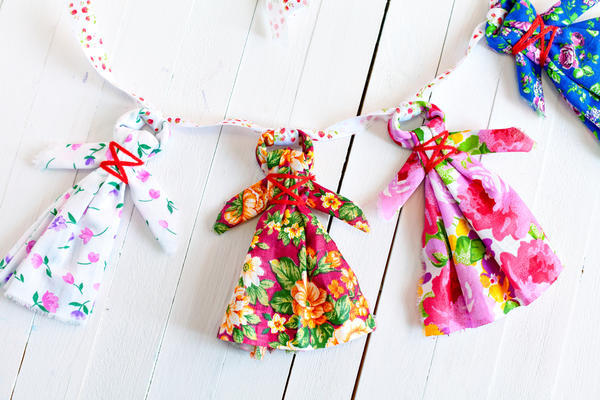 If a person did not have children in a family, then Moskovka dolls were made. This is a woman with six babies. Our ancestors firmly believed that just such a doll could bring a long-awaited pregnancy. In addition, this amulet could save large families. Yes, at that time there were a lot of such families in Russia. The Moskovka doll was hiding somewhere higher. She could not be given into the hands of strangers.. 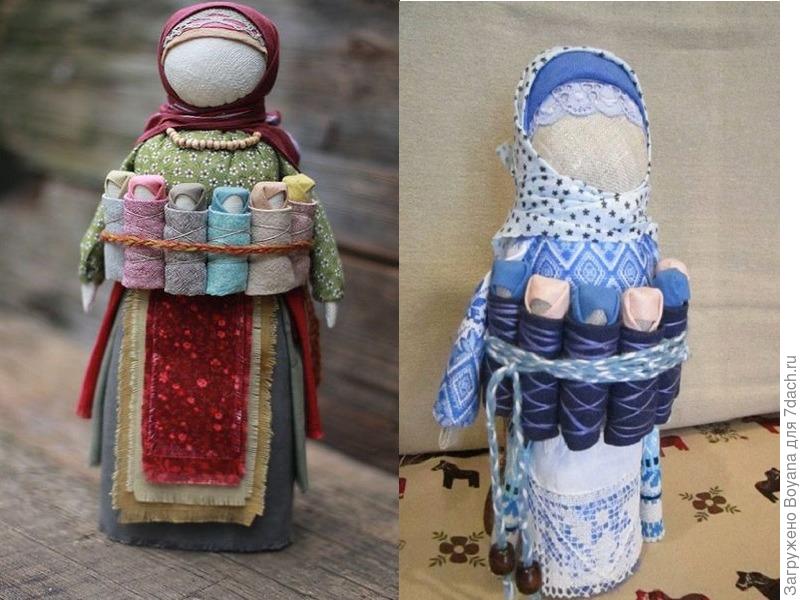 The Veduchka doll was made exclusively by women who wanted to be good mothers to their children. In general, all dolls amulets created with their own hands bring happiness to a person. And step-by-step instructions help in their manufacture. The handles of this doll must be intertwined with the handles of the little baby doll. It was this plexus that symbolized love and close family ties.. 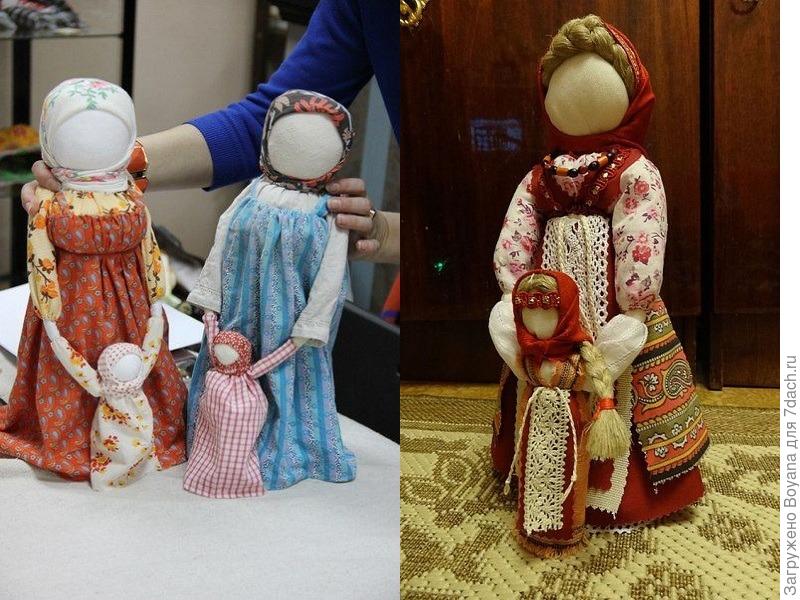 The krupenichka doll was stuffed with different cereals – oats, buckwheat, peas or millet. She could, depending on her spraying, bear the name Pea, Grain, etc. The doll symbolized an excellent harvest and also wealth in the family. As a rule, such a charm was made immediately after harvest. But it could also be made on Christmastide.. 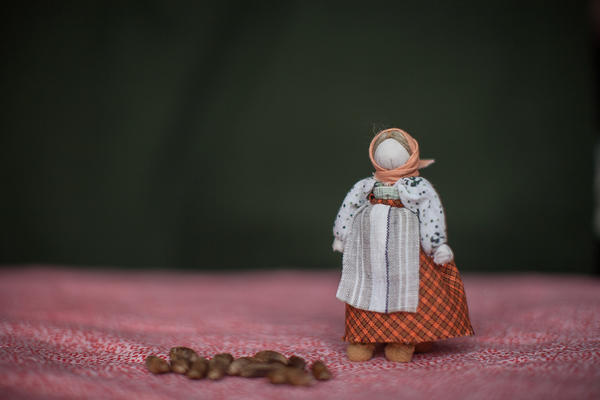 And as a wedding gift for the young, lovebird dolls were made. The two parts of this craft merged into a single whole. It was such a talisman that symbolized the strength of marriage..

Lovebird dolls were made as a wedding present for the newlyweds. Both parts of this craft merged into one and symbolized the strength of the marriage.. 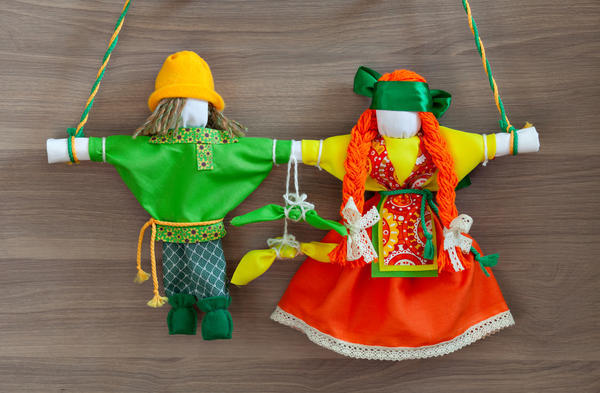 The Kolyada doll was made on the eve of the Slavic holiday called the Birth of the Sun. It began immediately after the winter solstice and ended after Christmastide. Kolyada could bring calmness and peace to the house. Sometimes such a talisman was burned on the very last day of Christmas. The doll was based on a birch log. It was on him that a dress made of new fabric was put on. Two bags were tied to the finished doll – with grain and salt. And a broom was tucked into his belt. He served as a talisman against evil forces. 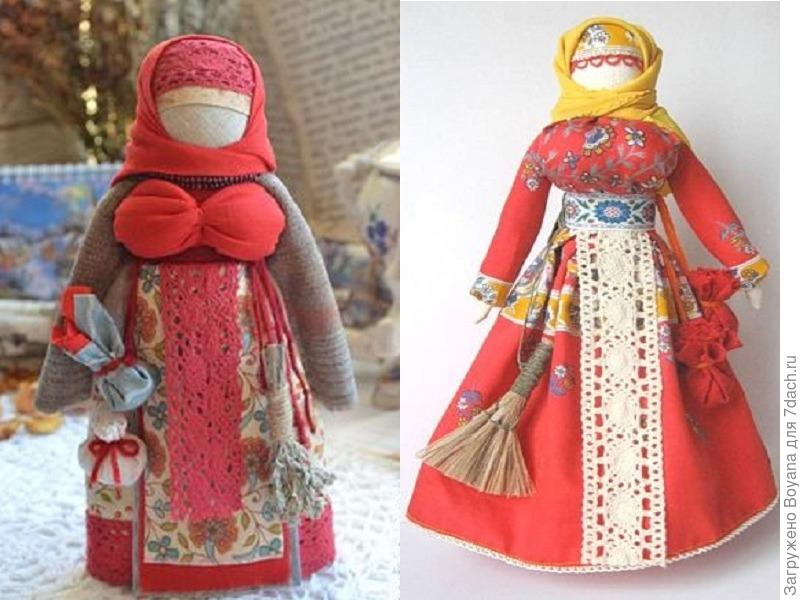 Much attention was paid to the Baba Yaga doll. In our understanding with you, Baba Yaga is an evil image and a slave who lives in the thicket of the forest. But our ancestors, the Slavs, considered her an adviser and a good helper in all matters. The doll was hung on a door or window. She had to have a broom in her hands to sweep bad and evil guests out of the house.. 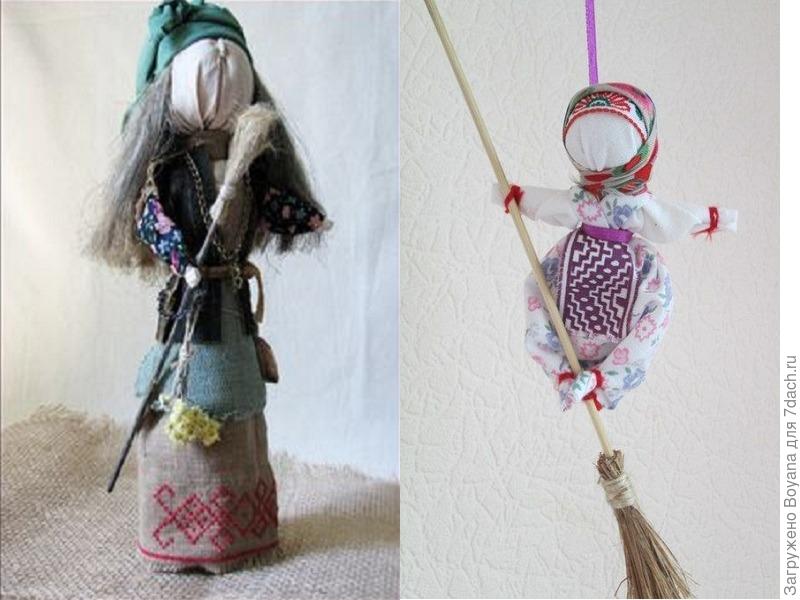 The Northern Bereginya doll had a special difference from all other dolls. It was made from small pieces of colored fabric. They folded into strips, folded in half. A kerchief was tied from above, which passed into the sleeves. The fabric for the manufacture of such a talisman was necessarily torn off from the worn out clothes. The doll was placed in the northern corner of the house. People believed that it was this amulet that could save the hut from all misfortunes.. 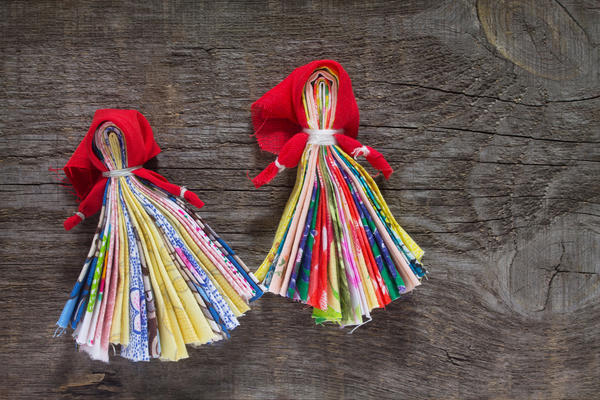 Brownie to help you

If you believe that brownies exist, can protect the house from evil forces, and keep order? If this is the case, then you definitely need to appease the brownie before the onset of Christmas or in the second week of Christmas time: for this you should put a small saucer with milk and sweets in the most secluded place. An invisible brownie will like these gifts if you make an image of him.. 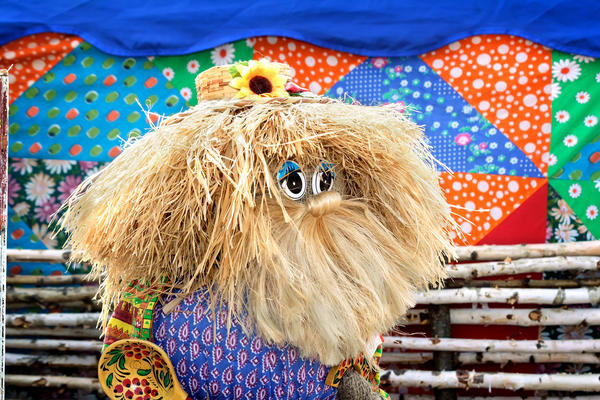 But if you like the young brownie more, you can remember the Soviet cartoon from virginity – “Little Brownie Kuzya” and take it as the basis for making a talisman.

It is better to make a figurine of a brownie from natural materials, for example, from clay or from burlap.. 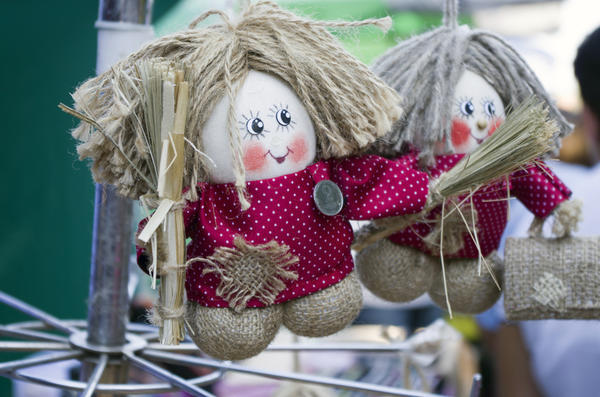 Brownie made of straw and burlap. You can put a banknote or a bag of grain into the pens of your brownie. In this case, your financial well-being will be good..

If the made brownie holds a spoon in his hands, then all members of your family will be full and happy with life.. 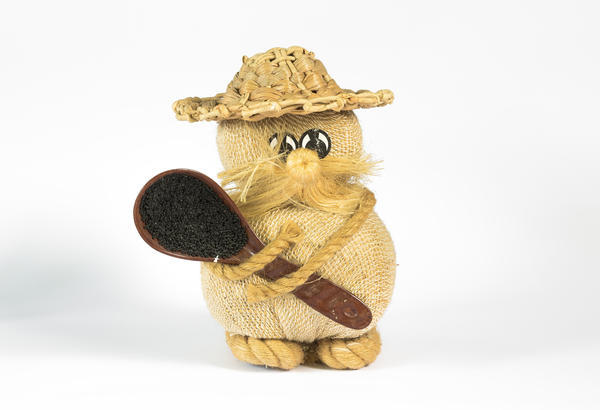 The brownie figurine should be placed in the hallway or in the kitchen. This is the most beloved habitat of this spirit..

But we should also not forget that all brownies just love the frequency. For this reason, make sure your plates and pans shine. And if you buy a house for a housekeeper, then order in your kitchen will be ensured. 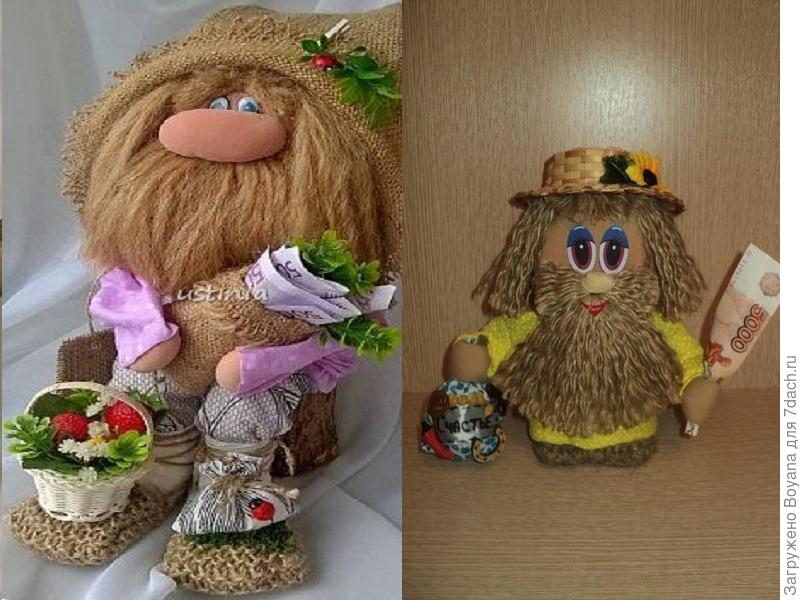 Amulets-objects are able not only to ward off evil forces, but can also fulfill any desires. For example, these are whisper boots. If you put them out the door early in the morning, putting grain in one of the felt boots, and in the other – coins, whispering your wish, then it will certainly come true. 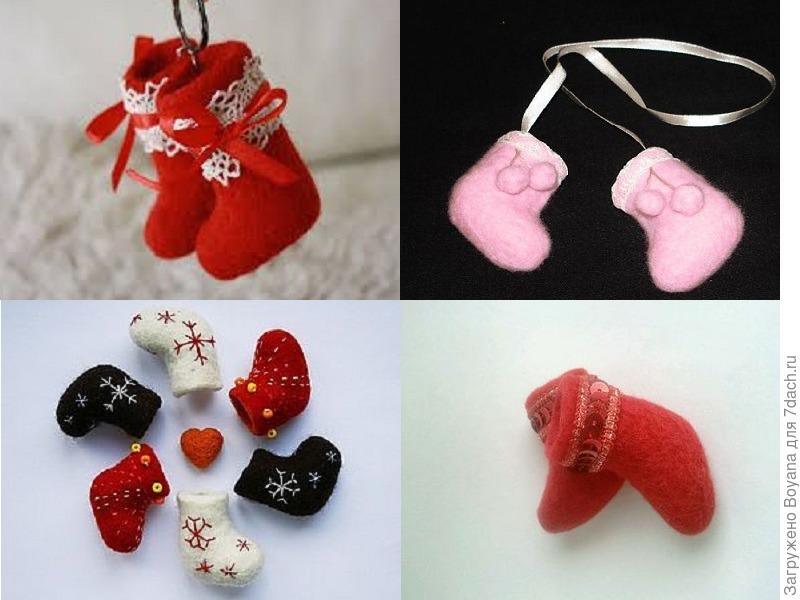 you can put small felt boots on the Christmas tree or use them as a keychain or as a souvenir in the car.

And to master the felting technique is very simple. In addition, little material will be spent on small models of boots. As a decoration for felt boots, you can use beads, lace, and even embroidery..

Broom, broom, give us some money

There is another one quite famous from ancient times amulet, which can be easily done do it yourself, relying on instructions and Photo.

Most people use a broom to this day in the household, just without thinking even about its magical power. This is a simple broom. Using a broom, you can get rid of dirt and dust in the house, sweeping away negative energy and bad thoughts from the house at the same time.. 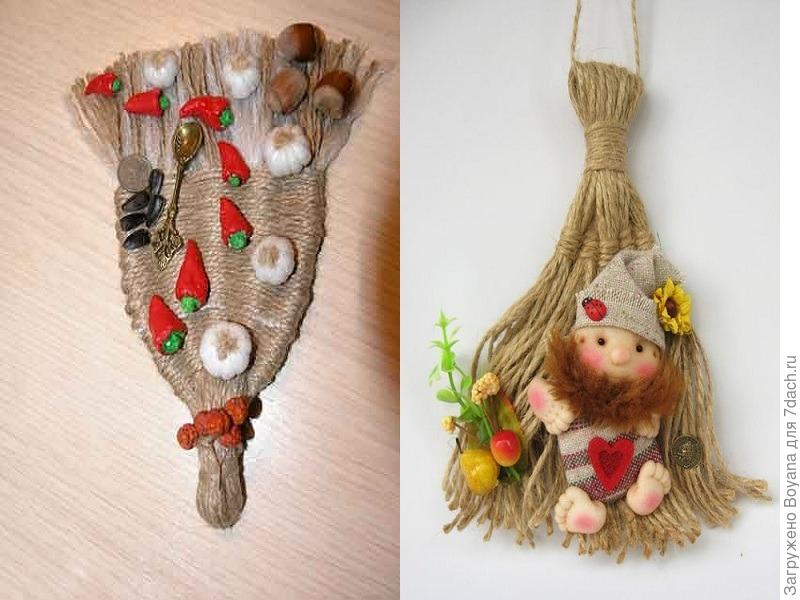 Together with a broom, we can also sweep away worries and problems. You can make an amulet yourself, which will become an interesting decorative element that decorates the interior of your apartment or even a summer cottage. For these purposes, several objects should be fixed on the broom at once, which embody all kinds of magical powers. For example, garlic. He can resist evil. Wheat and other legumes like that can bring prosperity to the house. Laurel swallows will attract health to the house. Nuts are success in all matters. Corn is the epitome of continuation of life. Pepper is a symbol of male strength, a sunflower with seeds represents the well-being and health of children. Bass-home comfort. You can also attach a brownie figurine to your broom. These two symbols can perfectly complement each other.. 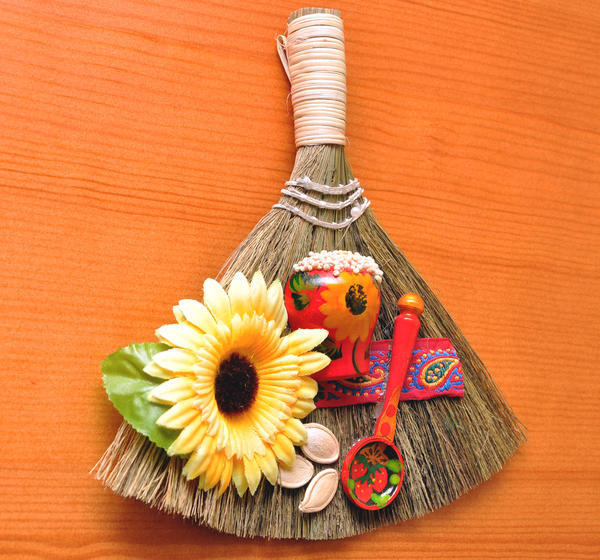 It is such an original and beautifully designed broom that needs to be fixed on the wall as a decorative panel. It is worth noting that it is best to make a broom not personally for yourself, but to give it to a close relative or a good friend – then the magic will definitely work as expected.

The amulet, in the magical power of which many of us still believe, is called a horseshoe. If you find a lost horseshoe, it’s luck. Those people who found an iron horseshoe on the road took care of it and hung it up over the door of their house. The horseshoe has been a symbol of well-being since ancient times..

But what should you do if shod horses have long ceased to graze near your home, and cars have long occupied our roads? You need to make a horseshoe yourself during the Christmas time and truly believe that it can bring good luck and will definitely drive away evil forces from your home.. 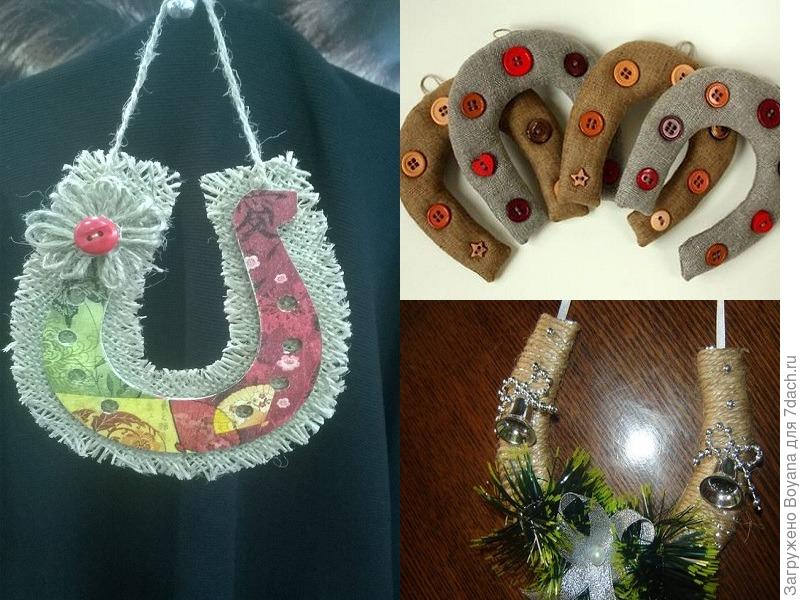 You don’t need to be a blacksmith to craft a horseshoe. This little thing has a simple shape. It can be cut out of wood. Also, a horseshoe can be knitted from threads or sewn from fabric. Or you can bake from salted dough.

It should be remembered that a horseshoe, which is hung with the ends up, can attract wealth to your home. The ends of the horseshoe pointing upwards are necessarily nice money. And a horseshoe turned upside down can create a dome of light energy in your house, protecting your home from various misfortunes.

Let the horseshoe made by you bring exactly what you need to your home.

And it doesn’t matter if you believe in magical power or not, may the magical time between Christmas and Epiphany bring good luck and good mood..