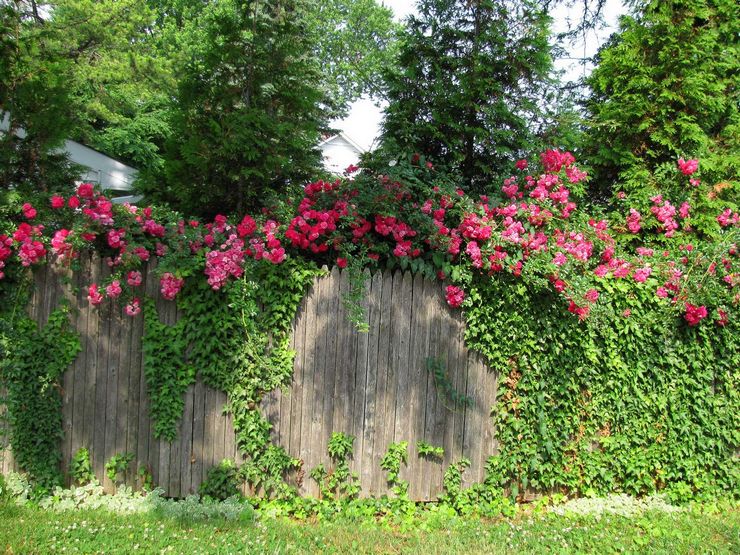 Not the last importance in the design of the site is given to vertical gardening. Most often, fences and fences are decorated in this way, and sometimes the walls of outbuildings. Planting climbing plants is the fastest and most common way to decorate a fence. Vine shoots, their lush foliage or bright flowers can make even the most nondescript fence elegant. In addition, these plants usually remain attractive throughout the season..

In addition to the decorative function, a fence or lattice entwined with greenery can perform other tasks. Such a living decoration is often used to disguise an old hedge or nondescript corners of a site. The green “wall” also helps to isolate the garden from prying eyes, retains noise and dust from the street and contributes to shading the surrounding area.

There are many climbing plants that can decorate a wall or fence. These include both annual and perennial species. Although annuals develop much faster, using perennials eliminates the hassle of re-planting each year. You should choose a crop for planting along the fence, focusing on the conditions at a particular site. The features of the climate, as well as the height of the fence, its orientation, as well as the degree of illumination will matter. All plants suitable for growing near such a support can be divided into several main groups..

THE BEST PERENNIAL VINES, which will instantly transform a fence, pergola, gazebo 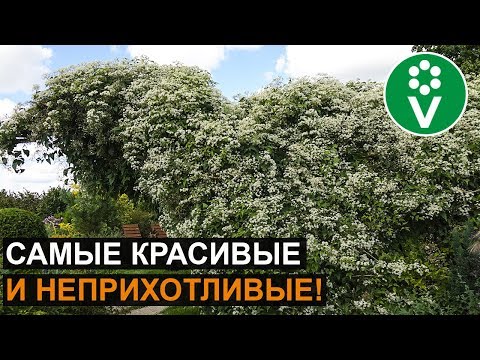 Plants of this type combine beautiful foliage with numerous flowers or ornamental fruits. Thanks to this feature, such vines attract attention and allow you to most effectively and magnificently decorate a vertical surface with supports. But the flowering or fruiting of such plants may not begin from the first year of cultivation, so the gardener should be patient.. 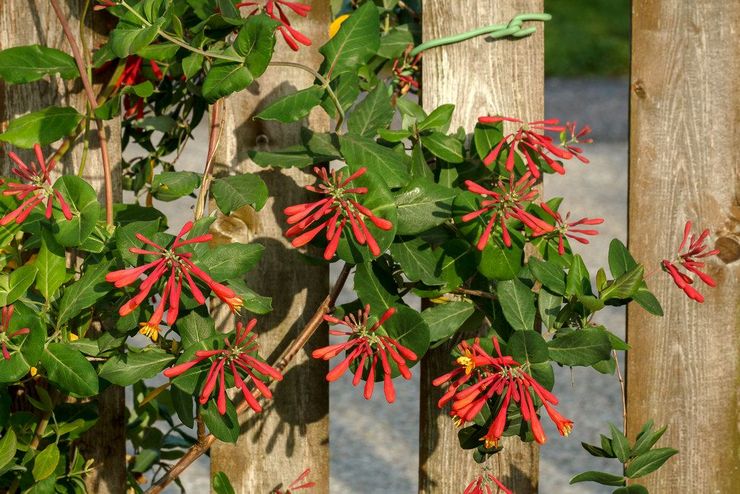 This evergreen or deciduous shrub with climbing shoots up to 6 m tall can grow both near fences and near walls. The color of its unusual graceful flowers varies depending on the species and variety and can be white, yellow or red. The flowers may emit a pleasant aroma or be odorless. The orange red berries of ornamental honeysuckle that are tied after they have flowered are considered inedible..

The frost resistance of the plant is considered average, so not all climbing honeysuckle can successfully take root in temperate climates. Before the onset of cold weather, plantings are watered abundantly to provide them with a supply of moisture, and then the roots of the bushes are well covered. 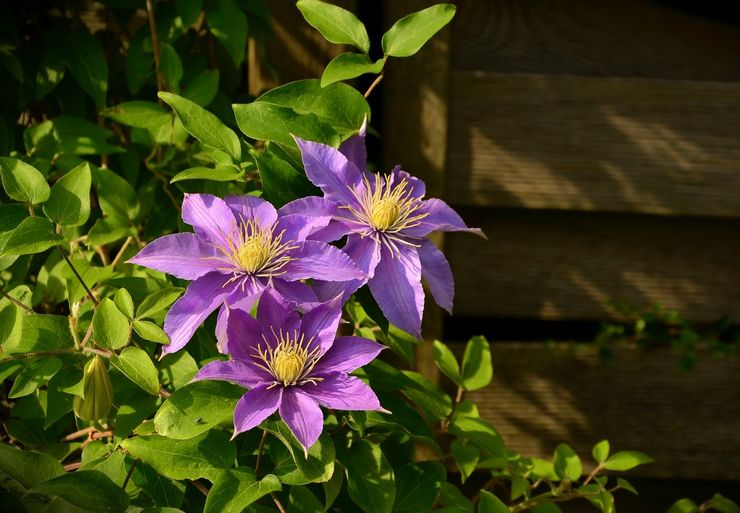 Large beautiful flowers of clematis make this liana especially attractive, and a wide assortment allows you to choose a variety with flowers of the desired color. In addition to the appearance, clematis also attract with their unpretentiousness..

Many types of clematis tolerate wintering well; as part of the preparation, the bushes are cleaned of dried or yellowed foliage. In addition, it is recommended to insulate the root system.. 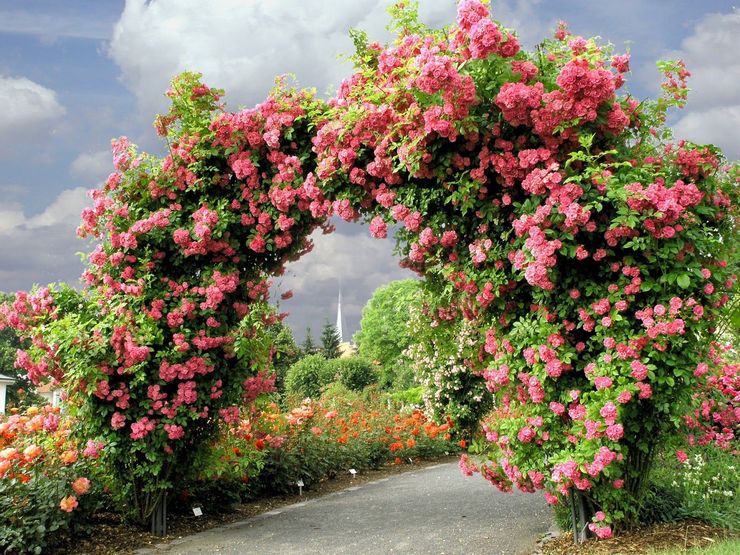 Climbing roses make the garden especially romantic. Bright flowers exude a pleasant aroma, and shoots can twine around gazebos, arches or fences. Unlike clematis, such a rose cannot trail itself, therefore, it will have to be strengthened on the support on its own, giving the stems the desired direction. The flowering time of climbing roses directly depends on the variety, but most often the period for the appearance of flowers falls on June. Although the rose does not offer too many conditions for good growth, certain rules still need to be known..

With proper preparation, these roses even tolerate frosty winters well. For the winter, all dry flowers and parts of the stems are removed from the lashes, the bush is removed from the supports, laid on the ground and covered. 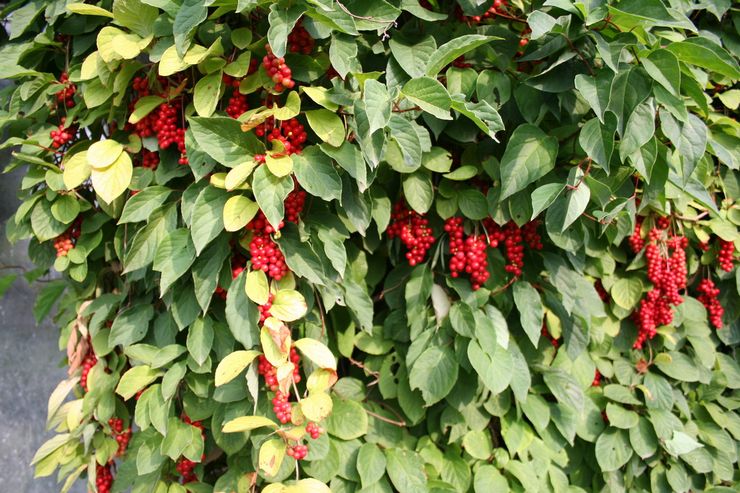 Fruiting of lemongrass begins from 6-7 years of cultivation. By this time, the bush has grown significantly. The ripening period of berries falls on the beginning of autumn. Fresh they are not very tasty, but they are used for making jams, syrups and other drinks, as well as medicinal preparations.. 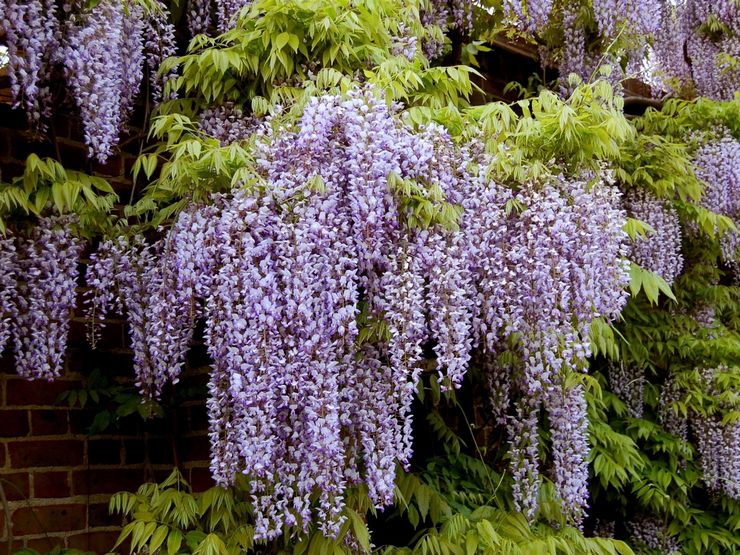 Lush clusters of wisteria inflorescences look incredibly attractive, but the constantly increasing mass of its fast-growing shoots requires reliable support and regular pruning. The color of the flowers depends on the species and variety. The flowering period can be in the spring or late summer. Some plants bloom twice a season..

Wisterias have frost-resistant species, but most of these lianas are very thermophilic and need shelter. They are removed from the supports, laid on the boardwalk, and then covered with earth, covered with spruce branches or covering material. Young plants are especially in need of protection. Adult bushes with stiff shoots are left on a support. 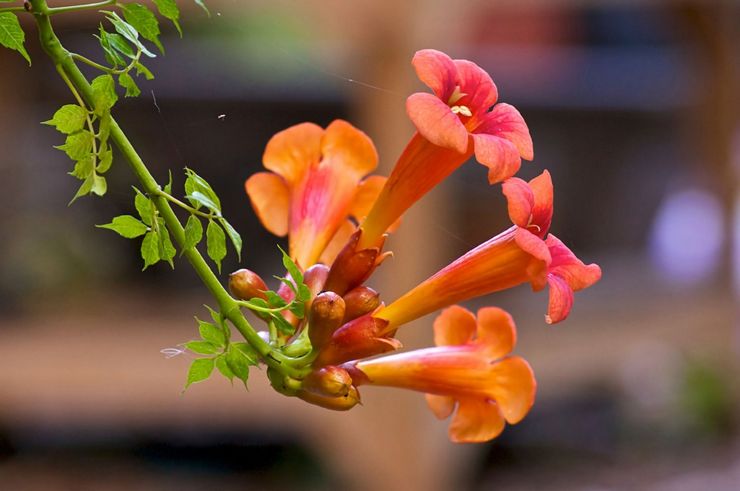 The bright flowers of this vine can be red, orange or pink. The length of its shoots can reach 15 m, so Kampsis can be used to decorate the highest fences. Kampsis blooms almost all summer. But the plant should be kept away from the houses – the flowers attract many different insects. In addition, the air roots with which the vine clings to the support are able to take root in the cracks of buildings. Sometimes the unpretentiousness and vitality of Kampsis turn it into a real weed, so the place for growing such a flower should be limited in advance.

Campsis are considered moderately frost-resistant plants, but they cannot tolerate long and harsh winters, therefore, in such regions, vines are sheltered by lowering them from supports, or wrapping them directly on them..

Even vines that do not form noticeable flowers can be very decorative. The bright color and beautiful shape of their foliage turns the fence entwined with their shoots into a real living carpet. Such plants are often considered more unpretentious and require only minimal care, retaining an attractive appearance for many years.. 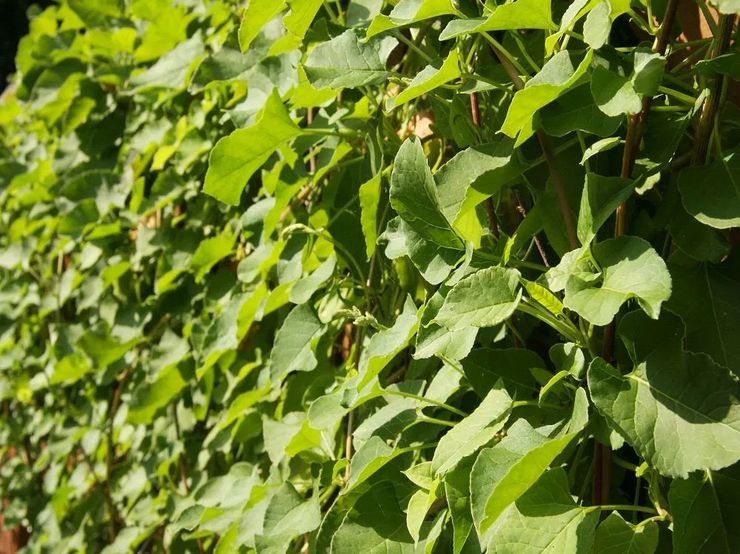 This beautiful vine lives up to its name, so it should be kept away from garden trees. Braiding such plants, the woodworm literally grows into the bark, leading to the death of the “support”. But on a metal grate, the vine will not harm other plantings. By autumn, its foliage changes from green color to light golden, and elegant orange-red fruits form on the bushes.

The woodworm is tenacious, resistant to diseases, but not too aggressive: its rhizomes do not grow around. Although it should be remembered that the berries of the plant are poisonous, and the aerial part is of considerable weight and needs strong support. 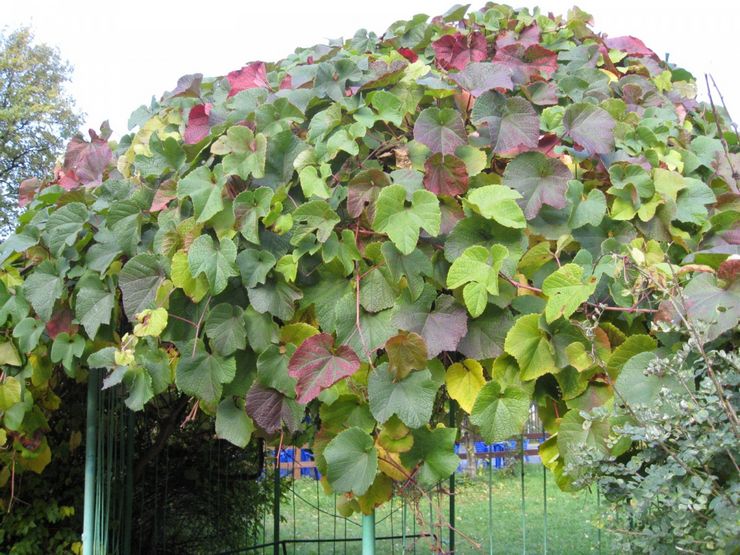 Such a plant can not only decorate a fence or a gazebo, but also bear edible fruits. But for this, the grapes should be taken care of more carefully..

This type of grape is considered one of the most frost-resistant, withstanding a drop in temperature to -45 degrees, so planting will not need a complex shelter. 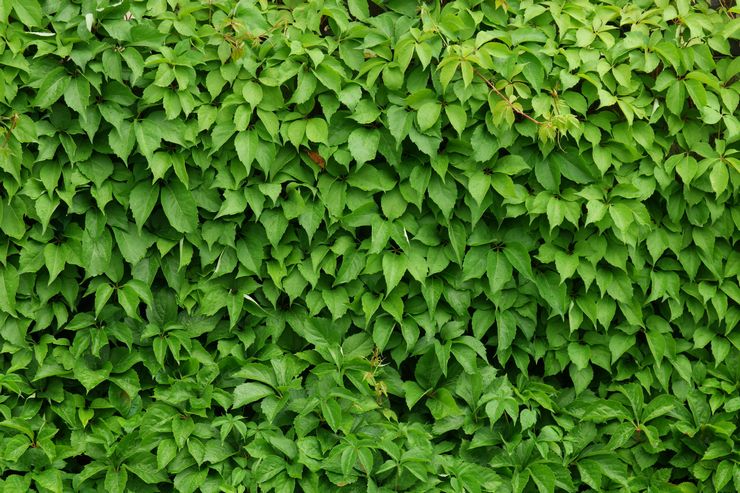 One of the most popular ornamental lianas also belongs to the grape family. These plants are distinguished by their fast growth rates and beautiful foliage, which by autumn changes from green to bright yellow, red or burgundy. The liana clings to the support with the help of antennae. Such grapes have many varieties, differing in color and shape of the leaves..

Although many varieties of such a plant tolerate frost well, it is recommended to protect the root area of ​​young shoots for the winter by covering it with earth or using a covering material. If the roots of an adult grape are bare, they should also be covered..

Most decorative vines prefer a bright location – it is there that their green mass can grow as quickly as possible. But some vines can also be planted in more shaded corners of the garden.. 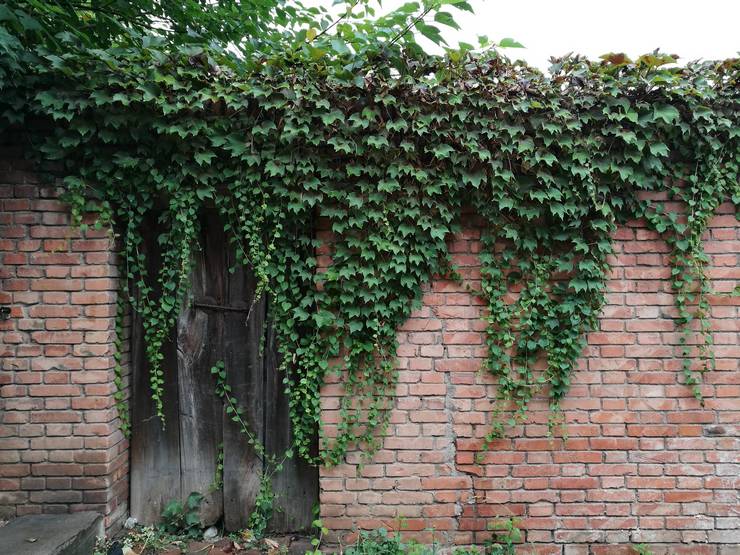 Ivy, with its recognizable green foliage, is fast growing and does not require complex maintenance. The length of its shoots can reach up to 30 m, which makes it possible to use it for landscaping not only fences, but also the walls of tall buildings..

Many varieties of ivy can easily endure winter in the middle lane. Since autumn, the roots of plants are mulched, and then they try to form a snowdrift at the planting site. In the northern regions, it is recommended to remove the shoots from the supports.. 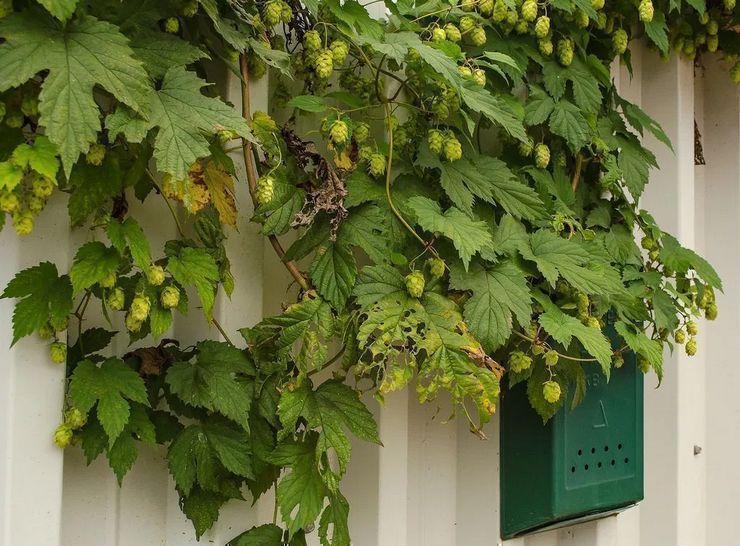 Numerous hop shoots covered with foliage and green cones provide good protection from dust and street noise. In addition, parts of the plant can be used to create healing potions. Hops develop rapidly and are able to braid a gazebo or a fence literally in a season. It’s easy to grow such a vine..

Hops are very cold resistant. To increase frost resistance in autumn, plants are fertilized, the aboveground part is cut off at the root, and before frost, the root area is covered with a layer of earth. Pruning old shoots can be carried out in the spring.. 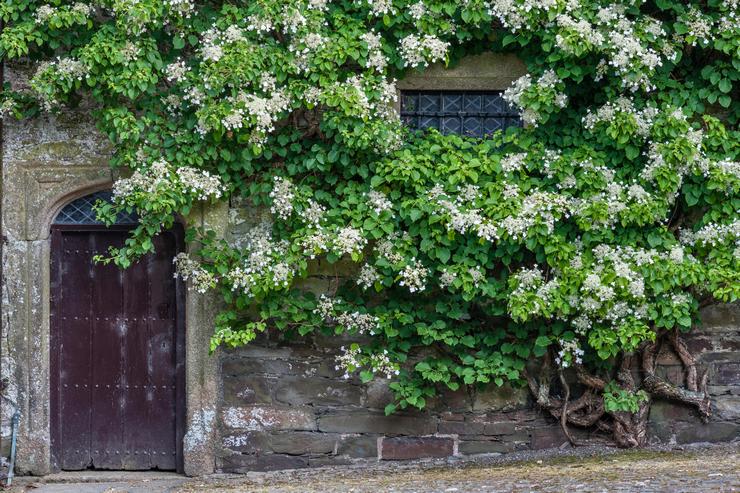 This type of hydrangea is found in gardens less often than the more usual bush forms, but is well suited for decorating fences and forming green hedges. The shoots of such a bush quickly grow on supports, and without them they can develop as a ground cover. Along with the heart-shaped foliage of beauty, fragrant white or pinkish flowers that appear in early summer are also added to the plant..

A green hedge formed by climbing plants can decorate any area. A wide species and varietal diversity allows you to choose the culture that best fits into the garden landscape. In warm regions, many of these plants are able to maintain their attractive appearance even in winter. In the northern regions, with proper shelter or the initial choice of winter-hardy vines, in the spring they can quickly restore the green mass and delight with their appearance until the cold weather.