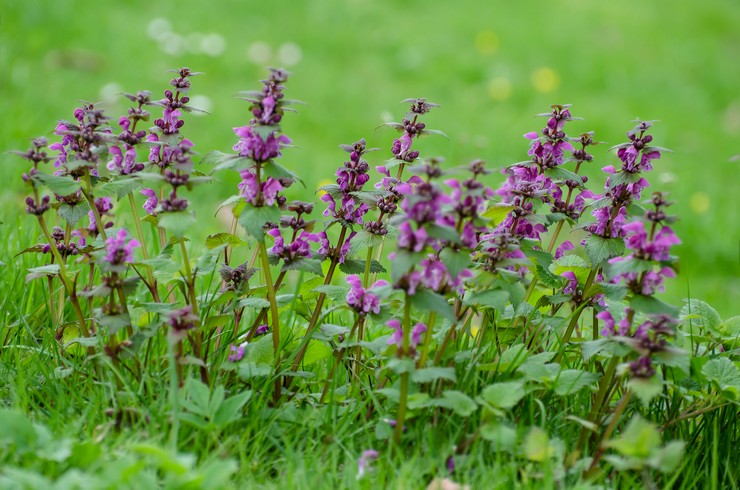 Lamb (Lamium) – is a herbaceous annual or perennial that belongs to the Yasnotkov family. In the wild, the plant grows in Eastern Europe and is more common near the river coast.

In external structure, it resembles ordinary low-growing weeds. However, the breeders managed to bring out interesting variations of cultivated varieties of Yasnotka, distinguished by a variety of color, leaf shape and shoot height. The green cover covers the soil surface throughout the spring-summer season. Low varieties of yasnotka are grown as decorative ground covers, and high varieties of perennials adorn flower beds and ridges in the garden.

Description of the cleaver

The plant is characterized by rapid growth, which indicates its similarity to common weeds. In height, the lamb can reach only up to 25 cm. It has a fibrous root system, therefore, in a short time, it is able to fill a large area with its branchy shoots. The dark green leaves of the lamb are heart-shaped, the ends are jagged. Soft veins break through in the middle of the leaf blades, sometimes spotting is present on them.

Peduncles are formed from internodes, grow up to 30 cm long and are covered with small leaves and flowers, which are two-lipped corollas, painted in various shades. In the middle there are thin stamens with black-violet specks of dust. Corollas form whorls. In place of wilted whorls, a seed capsule is formed, in which triangular nuts are located. This is what the fruit of the plant looks like. After ripening, seeds are poured out of them, which provides conditions for self-seeding of the lamb. The duration of flowering is observed for several months. The ovaries of the first flowers appear on the peduncles in late spring, and the formation of the fruit begins at the end of June..

Growing a lamb from seeds 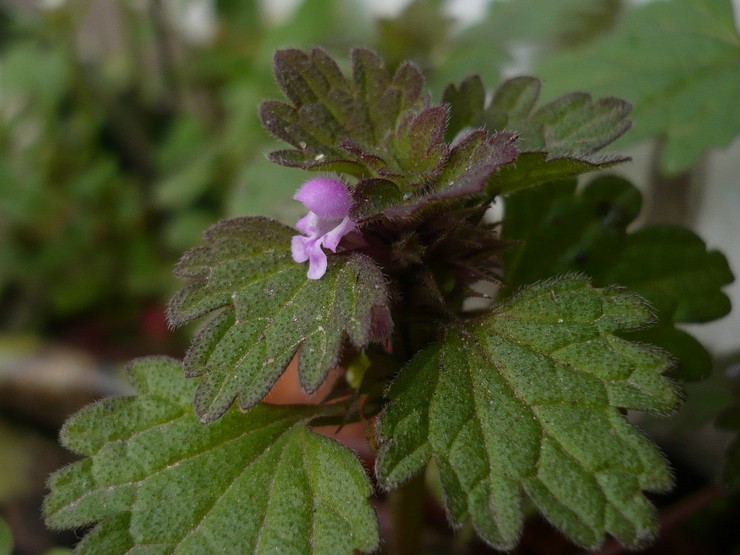 The optimal time for sowing seeds is considered to be late autumn or early spring, then the germination rate will be much higher. Seeds are planted directly in open ground. To do this, you must first prepare a place for growing. The soil is carefully dug up and weeds are removed. The seeds are evenly distributed over the bed surface. After some time, when the first shoots become visible, too dense crops of seedlings can be thinned out. During the growing period, moderate watering is required if there is no natural precipitation. Drying out of the topsoil should be avoided, but at the same time, moisture stagnation should not be allowed..

As a rule, the lamb is not afraid of the effects of weeds, since it is able to drown out their growth on its own and cover the area with a solid green carpet. Exceptions are perennials with a powerful developed root system..

You can observe flowering only in the second year after planting the seeds. It is recommended to avoid uncontrolled self-seeding, as the plant in the future may inhibit the growth and development of other cultivated plants located nearby. It is better to place different varieties of lamb’s in opposite corners of the garden in order to prevent cross-pollination, which will affect the disappearance of varietal differences between them..

Caring for the clear 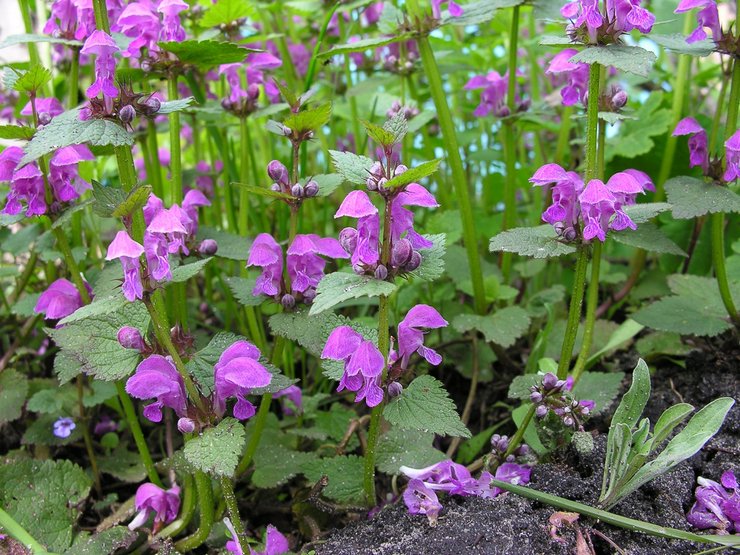 This herbaceous perennial is unpretentious when grown and feels great in areas located in partial shade of trees..

A loose and moist substrate containing a moderate amount of trace elements and other nutrients is chosen as the soil for planting. Otherwise, the lucid will grow rapidly and quickly fill neighboring areas, which will interfere with the growth of other flowers..

The plant needs regular and abundant watering, however, the roots should not be allowed to stay in the water for a long time. During a drought, the leaves of the lamb dry and curl, and the stems are bare. Before flowering, it is important to feed the soil with organic fertilizer..

Lamb, like any other decorative ground cover, must be mown periodically in order to maintain its attractive appearance and bushiness..

An adult plant is transplanted after five years. Lamb is frost-resistant. Bushes can be additionally not covered for the winter. 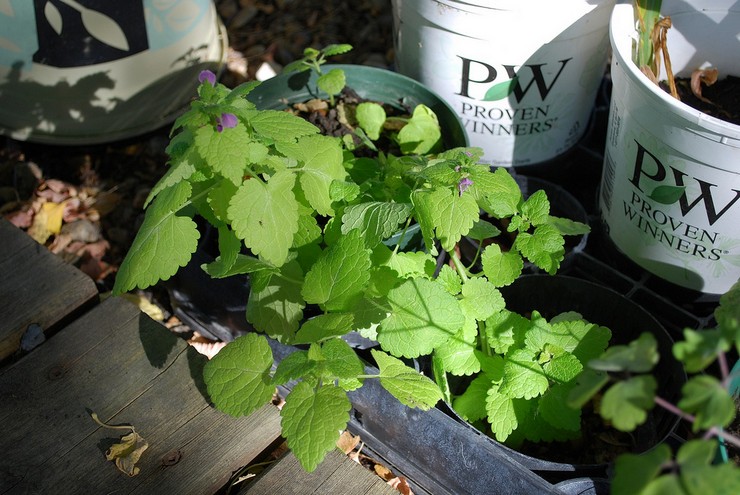 Reproduction by dividing the bush

This is the most common way of propagation of the lamellar tree among gardeners, which allows you to preserve the distinctive characteristics of the variety and see the flowering of the bush next year. It is better to divide the bush in the spring. To do this, it is necessary to carefully remove it from the soil and divide it into several parts, leaving in each of them root shoots that can give new shoots. Then the separated seedlings are placed in pre-prepared pits and watered abundantly..

With the help of cuttings, the lamb reproduces rarely. The procedure is performed, as a rule, in early autumn. Choose the strongest stems and carefully bend them to the ground, sprinkling them with a small layer of soil. With the onset of spring, young shoots that have taken root are separated from the main bush, since they will be ready for independent development..

Cuttings are carried out at the end of August. Chopped cuttings are needed as planting material, which are placed in a mixture of peat and sand for germination and stored under a glass jar or plastic bottle for some time. Cuttings are regularly watered and ventilated if condensation drops appear. After the roots begin to form, the cuttings can be transplanted into the open ground. Before winter, rooted cuttings must be covered with dry leaves or spruce branches.

As a result of improper care and excessive moisture in the soil, rotting of the root system occurs, so it is better to choose a convenient site right away and observe the watering regime. Sick bushes are dug up, and the places where they grew are treated with a fungicidal solution.

Among the most common pests, the leaves of the plant are most often affected by spider mites, scale insects and mealybugs. In the fight against them, only chemical treatment will help. 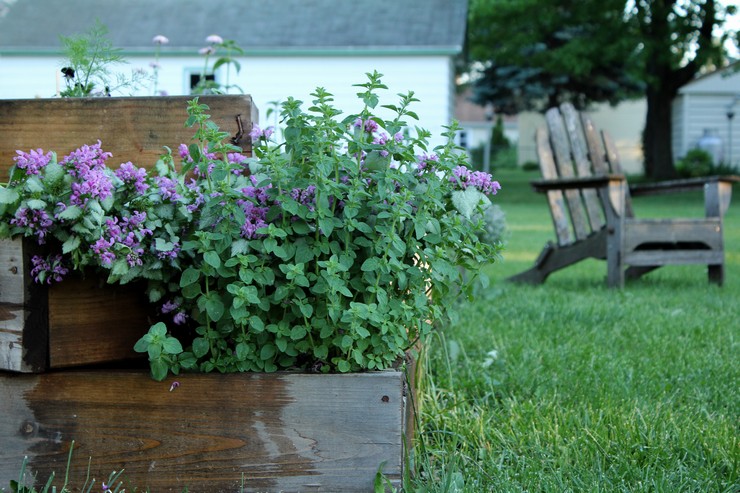 Variegated plant varieties are especially popular among gardeners. They are grown as a decorative greenery in free zones or in flower beds in the form of separate decorative groups. Yasnotka coexist well with lungwort, hosta and geyher. Often these flowers add beauty to gazebos, terraces and balconies. They are planted as an ampelous natural decoration..

Types and varieties of yasnotka

Today there are about 25 species of this garden perennial. Let’s consider the most common ones:

White lamb or dull nettle Is a herbaceous perennial plant that can grow up to 45 cm. The surface of the leaf blade and stems is rough to the touch. Light green leaves have an oval-elongated shape, the edges are serrated. They are attached to the stem with small petioles. The color of the flowers is white. Flowering begins in June and lasts until the end of September..

Lamb purple or red nettle – grown in the garden as an annual or biennial. The stems grow up to 25 cm in length and are covered with dense, tiny, oval-shaped leaves, which are colored dark green. The formation of flower ovaries begins in mid-spring and continues for several months in a row..

Lamb spotted or speckled – is a tall herbaceous plant. Its stems are highly branchy. The green leaves have silvery streaks. Delicate pink flowering of the bush can be observed from May to October. This type includes the following varieties: 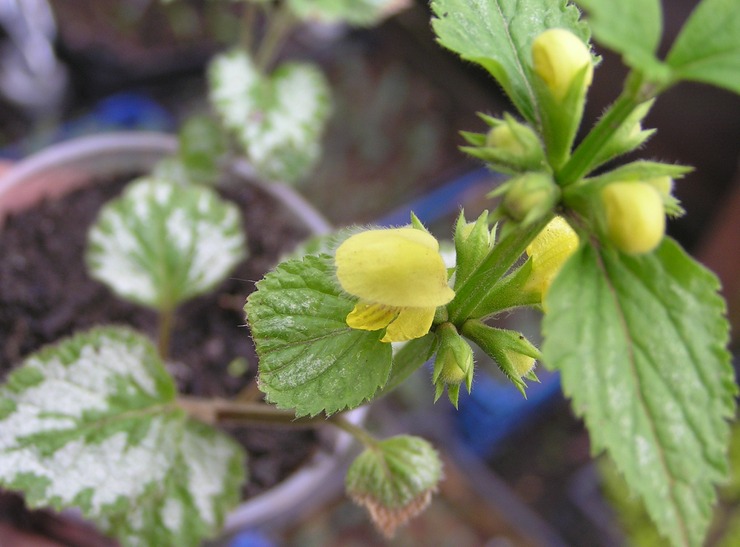 Green lamb or yellow – characterized by creeping pubescent shoots and leaves that have an elongated oval shape. Sometimes there are specimens with a marble mesh on a leaf blade. The flowers are yellow and appear on the stems in early May. The flowering of the bushes is repeated over the season. Yellow lamb is subdivided into varieties:

Orval’s lamb – This is a short plant with bright pink tiny flowers that adorn the bush for only a couple of months. Flowering lasts from May to June.

The healing properties of the lamb

Lamb is a useful plant and is used for medicinal purposes due to its high content of various nutrients. The main ones are alkaloids, flavonoids, essential oils, ascorbic acid and tannins..

The infusions prepared on the basis of lambda are prescribed for severe inflammation, sore throat, or as a diuretic. Herbal lotions are applied to open wounds to speed up the healing process. Hot baths have a beneficial effect on the body for gynecological diseases.

In any case, the use of this herb is best discussed with your doctor. Contraindications are only individual intolerance to the components of the lucid, which is accompanied by the appearance of allergic reactions in the body.

How to plant a lily (video) 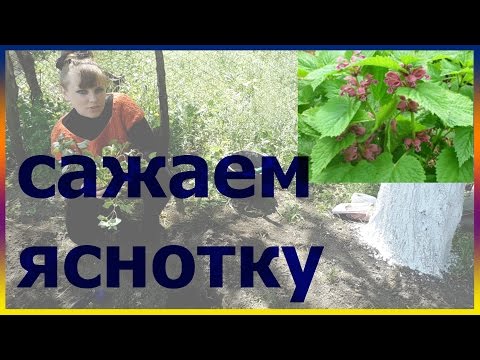