Purslane is a representative of ornamental plants, especially valuable for its beautiful flowering. Purslane is distributed almost throughout the Eurasian continent. The opinion is unreliable that the tropical territories of the Eastern Hemisphere may be the homeland of this plant. It is impossible to determine more precisely the place of origin of the purslane at the moment. The name “purslane” is translated from Latin as “collar”. The plant received this name due to the unusually opening ripe seed box.. 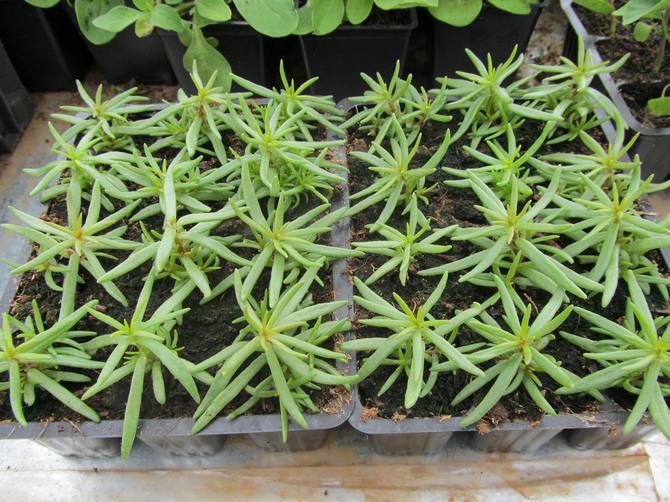 For planting, purslane seeds are suitable, which have been stored from six months to 3 years. Purslane can be grown both from seedlings and by direct sowing of seeds in a flower bed. In open ground, both seeds and seedlings are planted at constant daytime temperatures of at least 20 degrees, since the plant is afraid of cold weather. To obtain seedlings, seeds are sown at home no earlier than April..

For planting seeds for seedlings, take shallow wide containers. The substrate should be moisture and air permeable, loose and nutritious. You can make it yourself from a mixture of sand, fertile soil and charcoal, or buy it in a specialized store. But you should not use too peat mixtures, purslane will grow poorly in them. The planting container should contain a good drainage layer at the bottom. The substrate is distributed in an even layer, watered, sown seeds and sprinkled on top with a small layer of earth.

The containers are covered with transparent film or glass and left at a temperature of 25 degrees. The greenhouse is periodically ventilated and humidified. The first shoots can be observed already on the third or fourth day after sowing..

Seedlings are periodically watered and thinned out by transplanting into other containers. Only with the onset of stable high temperatures day and night can purslane be planted in open ground. Usually this is the end of May – first half of June.

When planting purslane seeds on open ground, they are first planted in a garden bed in a seedling hole. The bed is covered with a film until the seeds germinate, periodically ventilating and moisturizing. After the emergence of shoots with a height of 2-3 cm, the seedlings are transplanted to a permanent place. You can remove the film only when the temperature is at least 24-26 degrees.

The garden bed for planting purslane should be sunny and protected from drafts. Any earth is suitable, but if it is too dense, then it must be diluted with sand. Purslane is planted in several shoots in a hole according to the 10 by 15 scheme, since the plant has creeping stems, which will need a lot of free space for development.

Purslane care in the garden

Purslane is unpretentious in care. In hot weather, it is watered about once a week. Watering is usually done under the root or from above with a watering can. It can do without feeding, but if the soil is poor, then fertilizers should still be applied. The soil does not need to be loosened, and perhaps the gardener will not be able to do this, since the purslane stems cover the ground with a dense carpet.

The flower is resistant to both insect pests and bacterial and fungal diseases. Thanks to all these advantages, the purslane will delight gardeners with its beautiful flowering throughout the summer season, as well as in the fall before the first cold weather.. 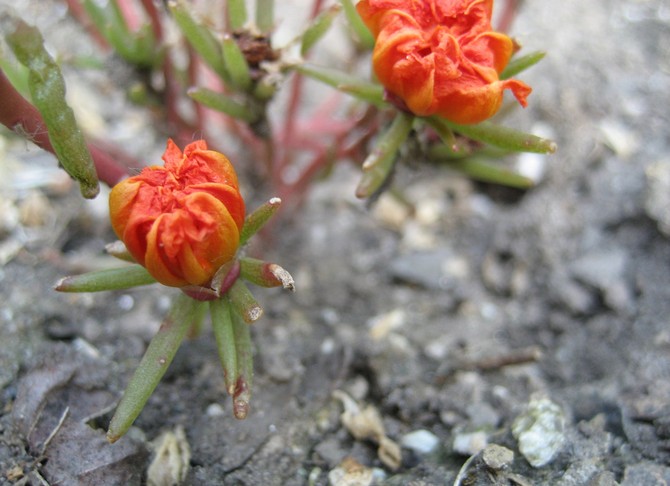 Purslane is a thermophilic plant. It grows and pleases with its flowering only in the hot summer season. With the onset of autumn cold weather, the aboveground part of the plant, as well as its root system, die. Having collected the seeds in ripe boxes in the fall, you can be sure that next year the purslane will again delight the gardener with its magnificent flowering.

Purslane can grow well in indoor conditions. To do this, it is enough to plant several shoots in a pot with a nutritious substrate and place them on the windowsill of the southern window. Purslane will delight with its flowering all winter and spring until the next summer season..

Breeding purslane is quite simple. To do this, you need to use a mixture of varieties, and as soon as the plant begins to bloom, then the specimens you like are planted by grafting and dividing the bush into new places. This procedure can be carried out in late June and early July. To do this, a shoot or part of an overgrown flower must be transplanted to another place..

Purslane also reproduces well by self-seeding. Next year, it is in the garden where the purslane flowers are growing now that new shoots will appear.. 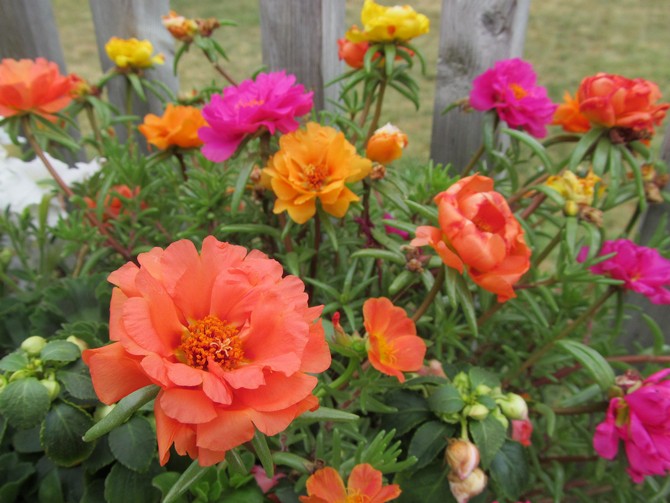 Purslane for decorative purposes is used to decorate alpine slides, design the foreground of a flower bed, a border. Purslane can grow beautifully in pots, creating a cozy atmosphere both in the garden and in the gazebo, on the summer terrace. Purslane is best placed with primroses. After the lilies of the valley, hyacinths, tulips complete their flowering, the time will come for the purslane to bloom. The flower bed will not be empty this way..

Purslane is considered the most resistant plant to pests. But due to an excess of moisture in the soil, it can be affected by a fungal disease – rot. The leaves become covered with dark spots, the stems are affected, both the aerial part of the plant and the root system rot. Purslane stops growing and developing, does not bloom. In order to cure the plant, you need to get rid of all its parts affected by rot, process healthy stems and leaves, as well as all the ground in the garden with solutions of fungicides.

Despite the fact that pests bypass the purslane, insects such as aphids or thrips can appear on it. Aphids are easy to see with the naked eye. It feeds on the sap of the plant and multiplies rapidly. If you fight with it, then soon the plant will be completely occupied by its colony. In order to get rid of aphids, purslane must be carefully treated with an insecticide solution diluted in water in the proportion indicated in the instructions for the preparation.

Thrips can be seen on the plant due to stripes and blotches of a silvery hue both on the stems and on the leaves of the purslane. The insect is so small in size that it is almost impossible to see it with the naked eye. To combat this pest, use a solution of a systemic insecticide (fitoverm, karbofos, etc.).

Useful properties of the purslane flower 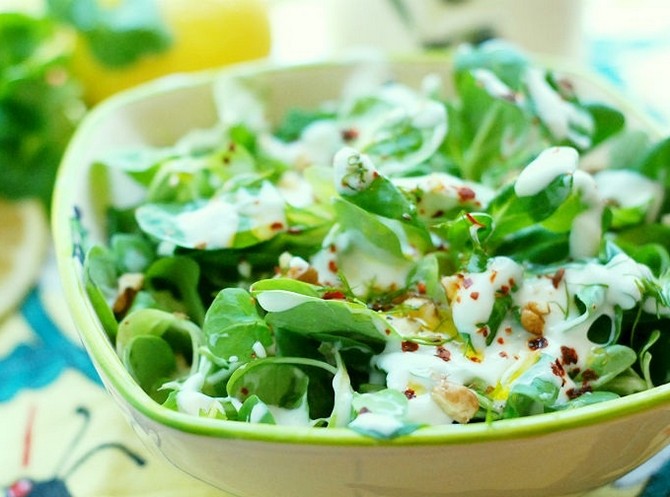 Among all types of purslane, only vegetable or garden purslane is endowed with great medicinal properties. Useful substances and vitamins are found both in the leaves and stems of purslane. I use its aboveground parts for medicinal purposes, both in medicine and in cooking and cosmetology..

Purslane is successfully used to treat a variety of skin diseases: erysipelas, acne, warts. Purslane can be used as a remedy for vomiting, as an anthelmintic drug, antiscorbutic agent. The plant is successfully used by homeopaths to treat patients with gonorrhea, multiple types of tumors, impotence.

But it is important to remember that it is strictly forbidden to use purslane for persons with increased nervous excitability. The leaves and stems of purslane contain the substance norepinephrine, which can stimulate the nervous system, increase the overall tone of the body, and give strength to a weakened person.

Purslane helps to normalize blood glucose levels, lower cholesterol. It has anti-inflammatory and diuretic effects. Infusions and decoctions from purslane are used to treat liver and gallbladder diseases.

Purslane is used by cosmetologists not only as a remedy for eliminating skin problems (acne, inflammation, pimples), but also as a nutritious ingredient that is part of lotions and masks and contains a rich complex of vitamins and nutrients.

Purslane is also prized in cooking. Young tender shoots are eaten. Vitamin salad is made from them, adding other ingredients to taste. You can find a large number of recipes for dishes in the composition with purslane. Purslane has a special specific taste and aroma, therefore it is successfully used in cooking as a seasoning in the preparation of soups, meat dishes. Purslane can also be pickled as a homemade preparation for the winter.. 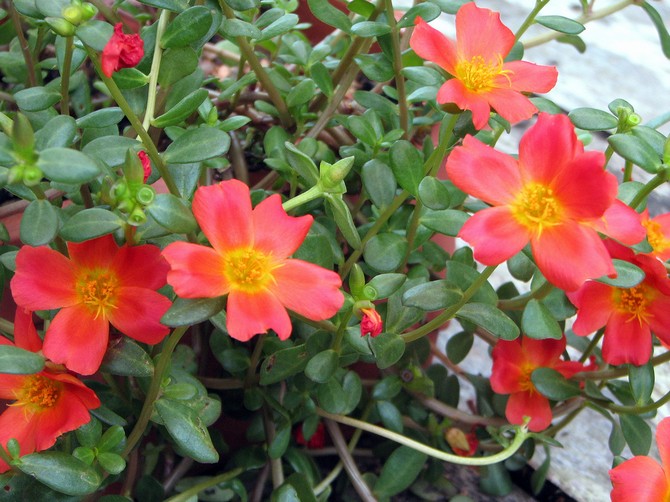 The purslane family has about 90 different species. Among them, the following are the most popular.

In our country, it is especially appreciated for its beautiful flowering. The plant is an annual, ground cover. It blooms for almost the entire summer season. In sunny, clear weather, during the day, the purslane flowers open up and delight with their beauty, and with the onset of darkness or cloudy weather they close. But there are also hybrid types of terry purslane that do not close at nightfall..

An annual in simplicity of reproduction is similar to a weed. With the help of self-seeding, it quickly occupies the adjacent territories. Stems spread on the ground, dense to the touch, oval-shaped leaves. It blooms with small inconspicuous yellow flowers. The seed pod, after full ripening, opens and scatters the seeds over a fairly large distance around the plant..

This type of purslane is valuable for the high content of carotene, ascorbic acid, calcium, organic acid, magnesium, zinc, copper, iron and magnesium in the leaves and shoots, as well as niacin. It is due to its medicinal properties that purslane is used both in the preparation of dishes and in the manufacture of medicines..

It is a hybrid artificially bred purslane variety. It has curly stems, oval leaves, forms a dense green mass. The ampelous purslane blooms with both simple and double flowers. Their shades are varied: red, yellow, white, purple, pink. The plant is successfully used to form pots, design alpine slides and other garden compositions.

Received the greatest distribution in Russia. It is a decorative annual. It is appreciated for its beautiful flowering, it is used to decorate garden beds. Purslane blooms from early summer to late autumn.

Stems of large-flowered purslane spread along the ground, completely covering the soil. The leaves form a dense green mass. Flowers can grow to about 7 cm in diameter. Shades of flowers are varied: white, burgundy, yellow, pink and purple. With the onset of dusk or in cloudy weather, the purslane closes its flowers. The plant is also self-seeding: from a ripe fruit-box, many small seeds are poured onto the ground.

The most favorite varieties of large-flowered purslane among gardeners are:

Purslane – planting, care and cultivation in the garden (video) 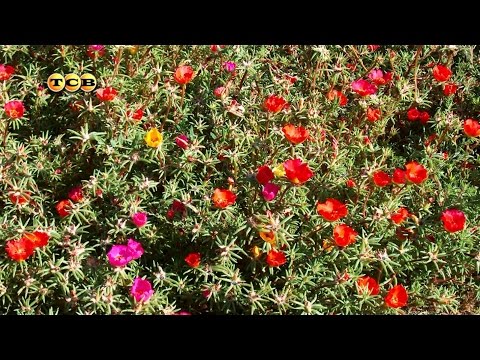