Today we will focus on an effective method for obtaining early cucumbers. In this case, the harvest can be very good, about 25 pieces from one bush. This effective way of growing early cucumbers is quite simple, but involves some successive steps to increase the root cucumber system, which is why such a high result is due. Fresh cucumbers can be obtained much earlier than usual..

Step 1. Primary increase in the root system of a cucumber by pouring soil into the boxes.

Sand should be poured on the bottom of the seedling box – a drainage layer, add prepared soil (in its composition, soil from the garden and humus are mixed in equal parts). Cucumber seeds are sown dry.

Each box should be half filled with a mixture of soils, no more than 4 cm.The depth of planting of cucumber seeds should not exceed 2 cm, and the distance between seeds can be 3 or 4 cm.

After that, the boxes are covered with glass and put in a warm place for three to four days. After the first shoots appear, the glass is removed, and the boxes are placed on the window facing the south side.

When the seedlings of cucumbers begin to grow, the soil is constantly poured until the box is filled with soil to the very edge..

It is worth taking a closer look and you can see small pimples on the cucumber stems – emerging roots. They will become the basis for the growth of the cucumber root system, and, consequently, the power of the bush..

Step 2. We transplant cucumber seedlings into pots and continue to build up the root system. 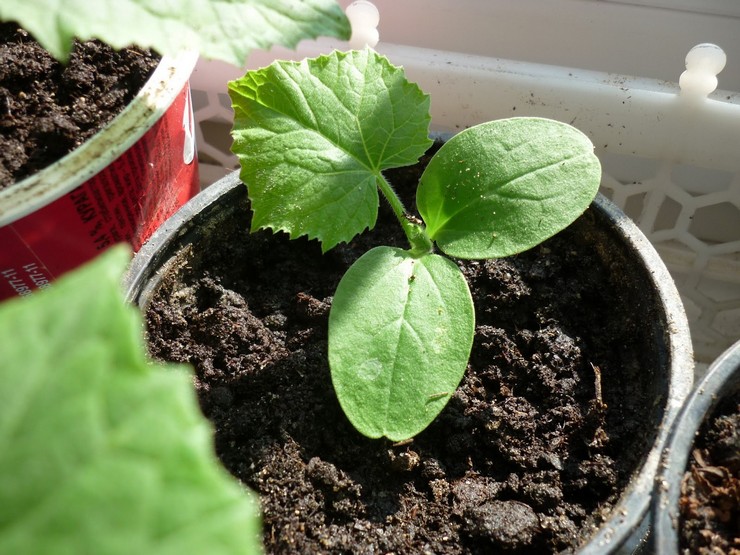 This stage should be started when the first two leaves appear in the plants. In order to properly transplant cucumber seedlings, the plant must be carefully cut out together with an earthen lump and put into a new pot.

As last time, the soil pots should be no more than half full. And again, as you grow up, you should sprinkle the finished soil until the new pot is completely filled.

Thus, for the second time it turned out to increase the root system of the plant..

Step 3. We transplant the seedlings of cucumbers into the ground. We build up the root system for the third time.

To plant cucumber seedlings in open ground, you need to dig a trench one meter wide (arbitrary length), deep on a shovel bayonet.

A humus layer of about 7 cm is poured onto the bottom of the finished trench. However, it is necessary to take into account such an important point – the trench should be prepared no later than a week before planting the seedlings, because the soil layer in the trench should warm up well.

When transplanting seedlings, the young plant is carefully removed from the pot, trying not to disturb the earthen lump. It’s good if milk or ordinary plastic cups were used instead of pots, because you can just cut them neatly. If a hard plastic pot was used, then first you need to gently tap it on the sides so that the earthen ball begins to move away from the walls.

The resulting earthen lump, the result of the invested work, should be well considered – if everything was done correctly, then the roots will literally penetrate the ground. If this is imperceptible, then somewhere in the cultivation technology mistakes were made. The main objective of this method is a significantly enlarged root system..

The extracted seedlings are lowered onto a layer of humus at the bottom of the trench and sprinkled with earth, to which superphosphate is added (about 40 g per plant). Seedlings of cucumbers are planted at the rate of about 20 plants per four square meters of trench.

On the sides of the plants, the trench is covered with last year’s weeds or straw, the layer thickness is about 10 cm. After transplanting, the trench is sprinkled and spilled with water. The straw layer will provide heat and nutrition to the plants, and carbon dioxide will be released during decomposition..

Follow-up care for early cucumbers is done in the usual way..

The advantage of this method is a great early harvest – much earlier than with conventional cucumber cultivation. The growing season will also be longer – about 160, instead of the usual 95. At the same time, labor costs for watering will be significantly reduced – the trench will retain moisture for a long time.