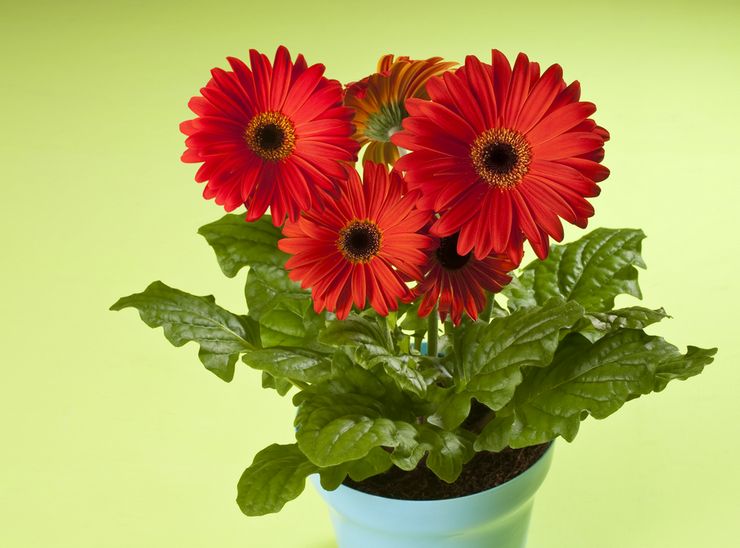 The gerbera plant (Gerbera) is a representative of the Asteraceae family. This genus includes about 70 species that live in the African tropics and subtropics, as well as on the island of Madagascar. According to one version, the genus got its name from the surname of the German botanist T. Gerber, according to another – from the Latin “grass”.

Gerberas are herbaceous perennials with leafless peduncles. Gerbera leaves form basal rosettes, and the length of the plates included in them is about 35 cm. Large inflorescences are baskets up to 15 cm in diameter. Their color can be different, and their structure can be simple or semi-double..

Most often, gerbera is used as a garden plant, but one of its species (Jameson’s gerbera) can also be grown at home in a pot. Such bushes are more compact and rather unpretentious.. 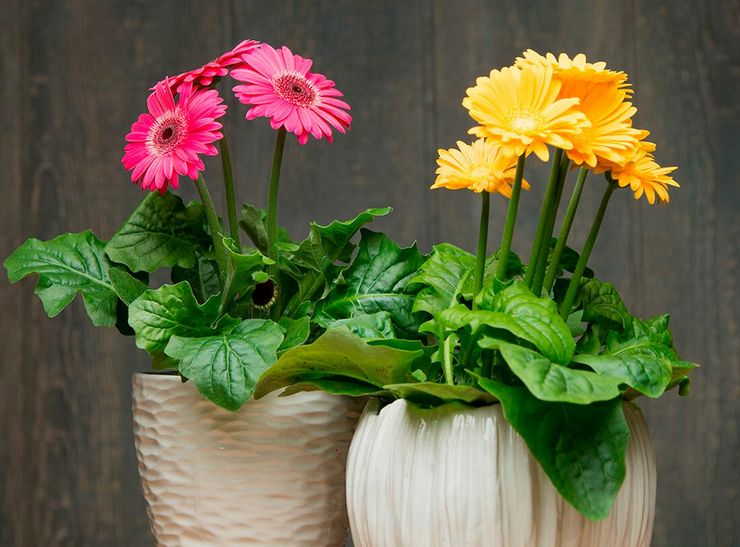 The table shows brief rules for caring for a gerbera at home.. 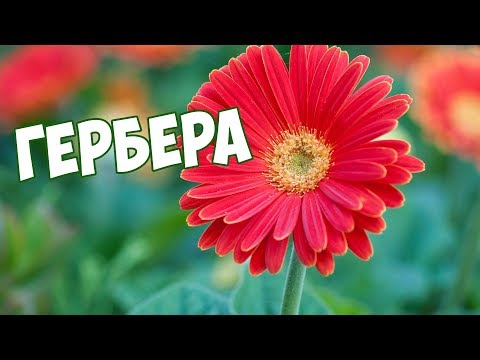 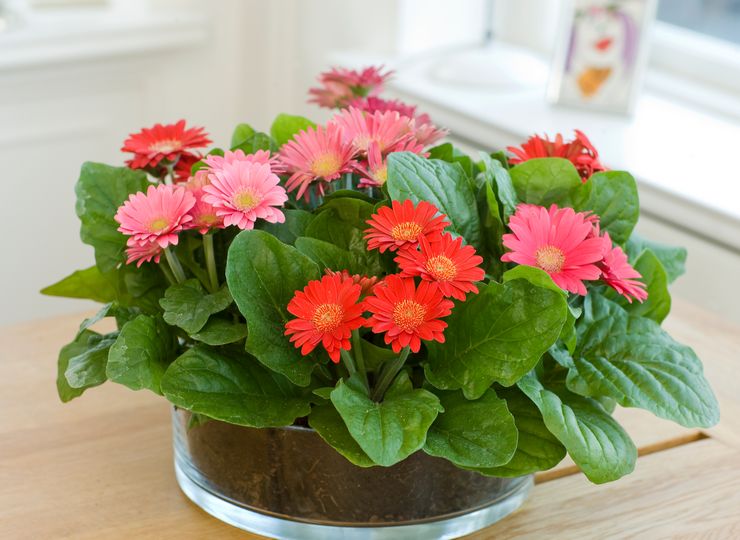 Home gerberas will need abundant but diffused lighting. Such a flower can be left in direct light only during the period of their low activity: the plant will not stand a sultry day on the southern window. But on the north side of the house, there won’t be enough light for the gerbera. It is best to keep such a flower on the windows of the west or east direction. If the gerbera still stands on the southern windowsill, it must be shaded in the afternoon..

Gerberas need good ventilation. For the summer, the bush can be moved outside by choosing a place for it, sheltered from the midday sun. If the lighting mode changes significantly at the same time, they begin to gradually accustom the flower to new conditions. If in the cold season the plant does not have enough light, you can use special lamps, for example, fluorescent.

In spring and summer, indoor gerbera requires moderate heat – about 22-24 degrees, but not less than 20 degrees. During flowering, daily temperature fluctuations are of particular importance – it is desirable that they are not too large. The combination of cold nights and hot days can have a negative effect on the appearance of inflorescences..

After flowering, the bush plunges into a dormant period. At this time, the temperature of its content should be reduced to 14 degrees (but not less than 12 degrees). Indoor gerbera can develop without such a rest, but after two years of constant growth, such bushes will completely lose their decorative effect and will need to be replaced.. 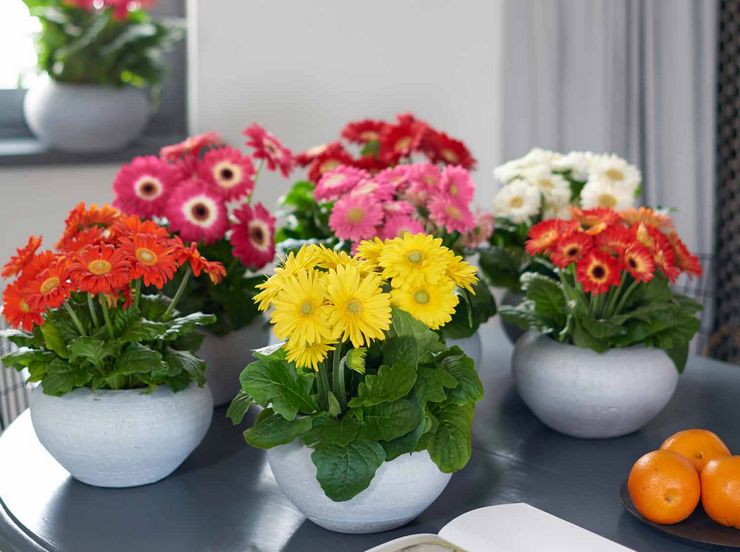 All the time of active growth, the gerbera is watered moderately, using settled warm water. The temperature of the soil and water should be approximately the same, otherwise the bush may get sick. Watering is carried out as the upper part of the soil dries up. At the same time, water cannot be directed inside the leaf outlet – such conditions contribute to the development of rot. Watering can be carried out through the sump, be sure to drain excess water about half an hour after filling it.

Although gerbera does not like abundant moisture, it is impossible to completely dry out the soil in a pot with it. It is especially important to monitor this during the rest period of the plant, when they try to reduce the number of watering to a minimum: the bush begins to consume less moisture, so its stagnation can lead to the development of diseases.

For the full development of gerbera, a sufficiently high humidity is required, but its leaves should not be sprayed. To increase the level of air humidity, the flower pot is placed on a pallet with wet peat or expanded clay, or they try to spray only next to the bush so that droplets do not fall on it. 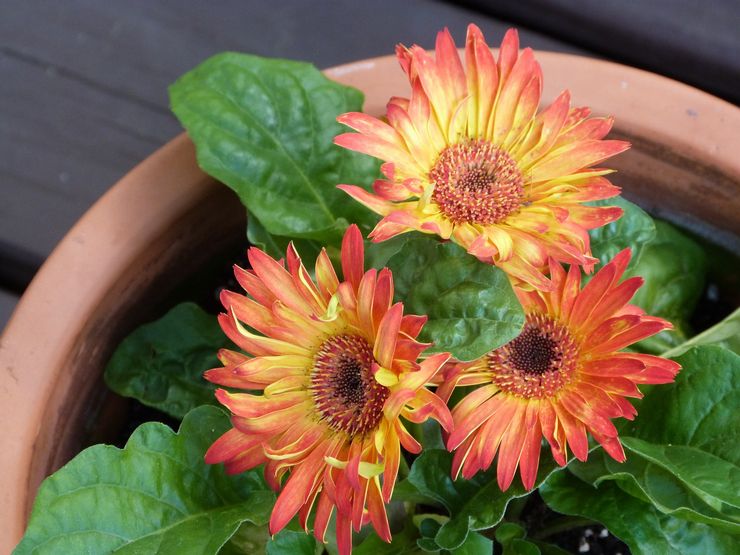 The soil for a room gerbera should consist of two parts of leafy soil and one part each of sand and peat. In such a simple composition, you can add hydrogel balls, which will maintain soil moisture and prevent it from drying out. You can use universal substrates for roses or asters..

Gerberas feed only during their most active development – in spring and summer. For them, universal mineral compositions for flowering crops are suitable. They are made about twice a month. The bushes are also responsive to the introduction of magnesium sulfate – a lack of this element can manifest itself in the formation of pale spots on the foliage. If the house is cool enough, you can add phosphorus compounds to such dressings. Organics are not used for gerberas. In winter, when the plant is resting, it is not fed.. 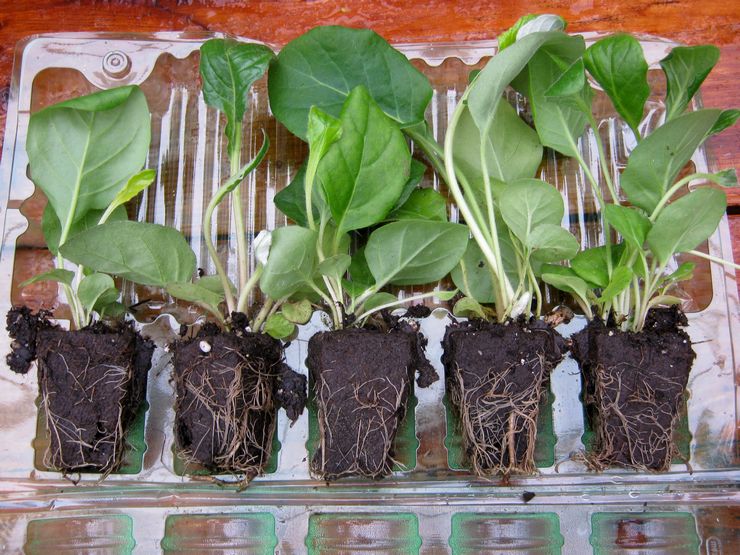 Gerberas are transplanted in the spring as needed. The size of the new pot should only slightly exceed the size of the previous one – in a too spacious container, the plant will not be able to bloom on time. A drainage layer is laid at the bottom of the pot, and slightly acidic soil is selected for planting. When transplanting, it is important that soil particles do not fall into the rosette of the flower leaves. The bush should also not be deepened excessively – the root collar should be about 2 cm above the ground.

If the gerbera was purchased in a flower pot (in a store), then the plant should not be transplanted for two weeks. It must undergo acclimatization, get used to the new conditions of detention, that is, stay for some time in quarantine conditions. But after that, transplanting a gerbera is simply vital, since usually flowers in a store are sold in a special soil that is not suitable for the growth and development of a plant at home.. 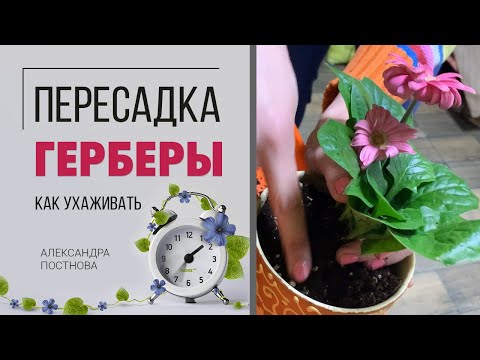 Gerbera bloom occurs at a certain duration of daylight hours. It usually falls at the very end of summer: the buds are tied when the day begins to wane. Like all similar plants, gerbera baskets are not a single flower, but a multi-flowered inflorescence. In its middle there are small tubular flowers, and at the edges – from 1 to 3 rows of wide ligulate flowers. The color of both those and others can be very diverse and includes up to 30 shades of various colors with the exception of the blue-blue range.

To prolong flowering and activate the formation of new buds, the faded baskets should be removed by carefully breaking their peduncles out of the bush.. 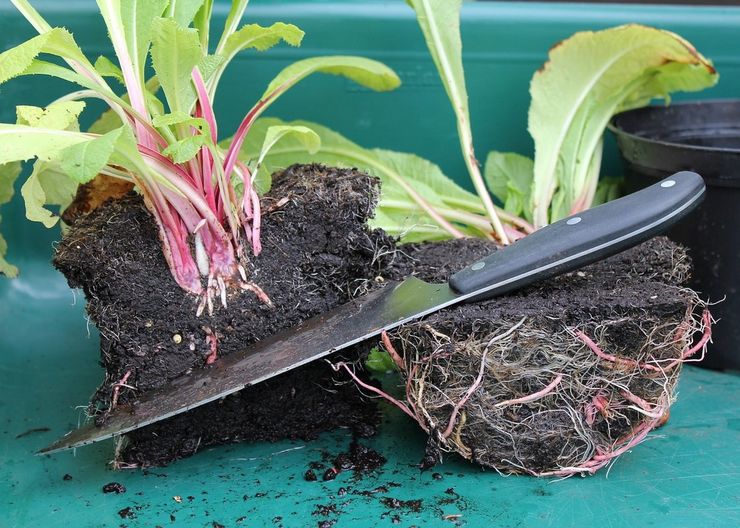 The most common and often used method is considered to be gerbera propagation by dividing the bush into parts. This method allows a large number of young plants to be made from one adult plant. An adult gerbera after such a procedure acquires a second youth and continues to grow and develop. Dividing the bush allows you to preserve all the characteristics of the original plant, which cannot be guaranteed by seed reproduction..

This breeding method cannot be carried out during the flowering period. As soon as the plant has bloomed (preferably in the summer), you need to very carefully pull it out of the flower pot, lightly shake off the ground and divide it with a knife into as many parts as possible. To do this, choose bushes about 3-4 years old. The division is carried out in the spring. Each division must have at least a couple of growth points – this will allow such gerberas to bloom next year..

There is another option that allows you to leave the gerbera in the pot. The top layer of earth must be removed before the trunk of the plant appears. Then carefully divide it into two parts with a knife and sprinkle the cuts with soil. After a short time, both parts will take root, this will be a signal of readiness to plant them in different containers.

Gerberas can also be propagated by cuttings, but this method is rarely used at home.. 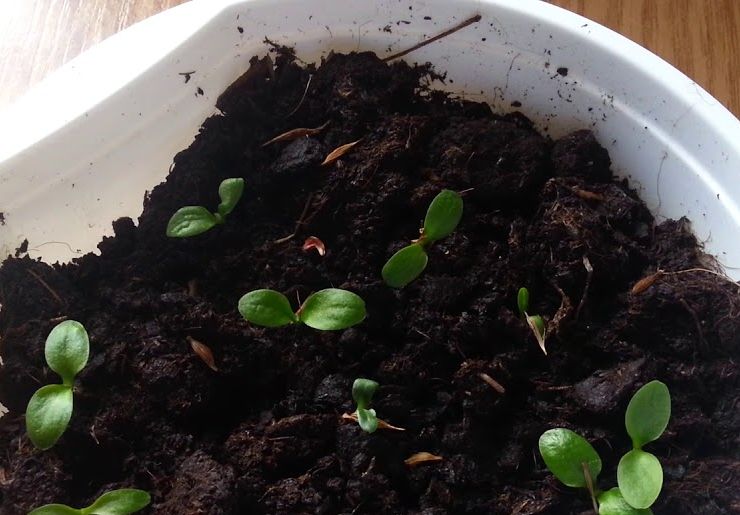 Gerbera seeds do not guarantee the transfer of the characteristics of the variety, and also lose their germination rather quickly. They are sown in spring using loose and nutritious soil. When self-preparing the substrate, you can mix leafy soil with humus and a double part of the turf, and then add a little sand there. It is recommended to prepare the seed in advance by keeping the seeds in wet gauze for several days.

The seeds are sown to a depth of about 5 mm and covered with foil. Their germination takes from several days to a month. When the sprouts form 2-3 true leaves, they dive into a more spacious box. With the appearance of the 5th leaf blade, the pick is repeated, planting young bushes in their own pots. A month after this procedure, gerberas can be fed for the first time. Flowering begins about 10.5 months after sowing. 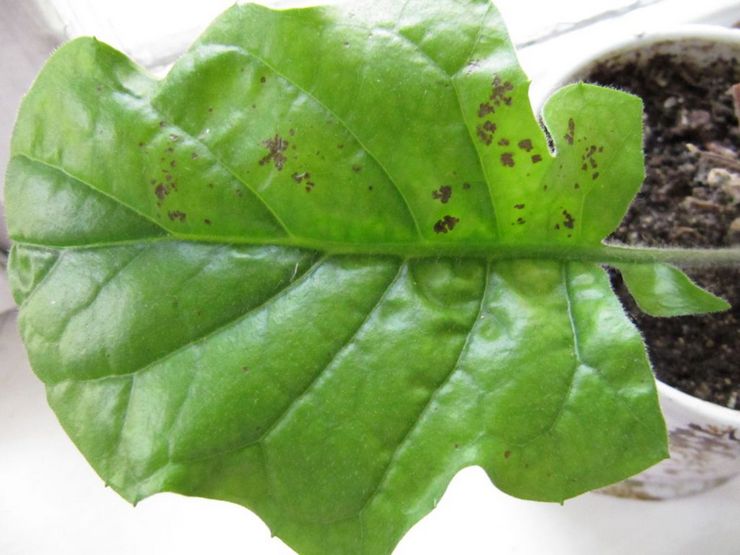 The main problems in growing gerbera are associated with improper care of the plant. Usually, the cause of the disease can be determined by assessing the appearance of the bushes..

Gerberas can be harmed by the main pests of home flowers – spider mites, scale insects, aphids, etc. Appropriate preparations should be used against them.

Types of gerbera with photo 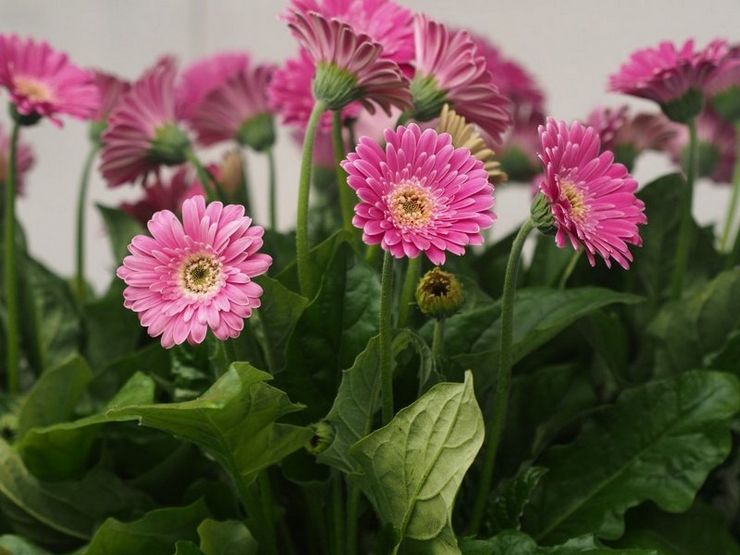 Of all types of gerbera, only one is suitable for home cultivation – Gerbera jamesonii. It is this species that becomes the basis for varieties intended for indoor culture. Such plants are herbaceous bushes with strong and dense stems. Their leaf blades form a rosette located just above the ground level. Large feathery foliage can be slightly pubescent, and its length reaches 20 cm. Sometimes such plants form axillary buds at the base of the leaf plates. The inflorescences resemble large colored daisies. The size of each basket is approximately 10 cm.They bloom at the tops of bare peduncles and can have different colors..