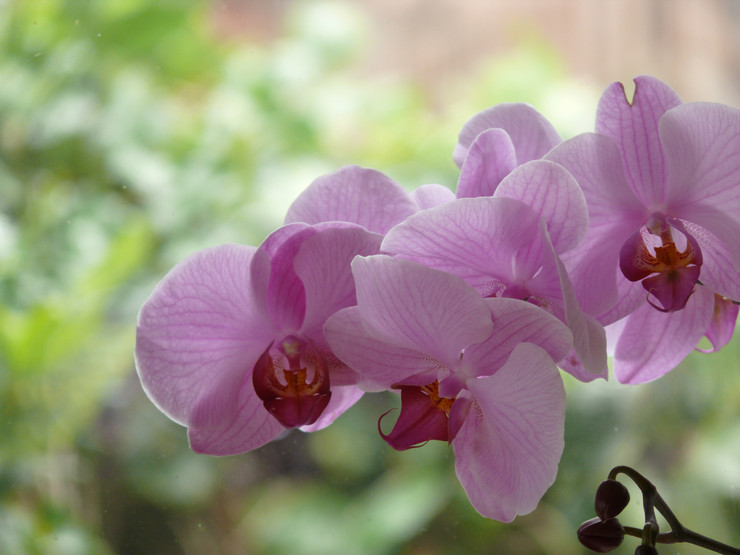 The family of noble orchids is one of the most numerous in terms of the number of species, varieties and hybrids. In nature alone, there are about 25 thousand species, and taking into account the fruitful work of breeders for many decades, the number of hybrid varieties already exceeds 20 million copies. Orchids are flowering plants that can grow in nature in almost any climate and in any territory except Antarctica. The beauty and unique aroma of orchids have won the hearts of many flower growers for a long time. In order to grow an orchid and achieve constant flowering at home, you must strictly follow the rules of care and the individual characteristics of this unusual flower..

Orchids are perennial flowering herbaceous plants that differ in shape, height, growing method, type, appearance, color of flowers and many more characteristics. Some can grow in the ground and are called terrestrial, or they can be attached by roots to rocks or all kinds of trees and are called epiphytes. These plants are also diverse in height. They can be quite small, only a few centimeters in height, and some species are real giants with a growth of about 3 meters. The size of the flower also starts from a few millimeters in diameter and ends more than 25 cm.There are orchids that shed their foliage and evergreens.

Orchid flowers not only differ in a varied palette of colors, but also surprise with their bizarre shapes. They look like a woman’s stiletto heel (like a Lady’s slipper), a butterfly (like a phalaenopsis), stars or rosebuds (like a dendrobium), as well as birds, insects and other plant species. Blooming orchids attract a lot of attention of numerous insects with their pleasant aroma and long flowering. When grown at home, some types of orchids can bloom from several months to six months..

Types of orchids and rules for caring for them 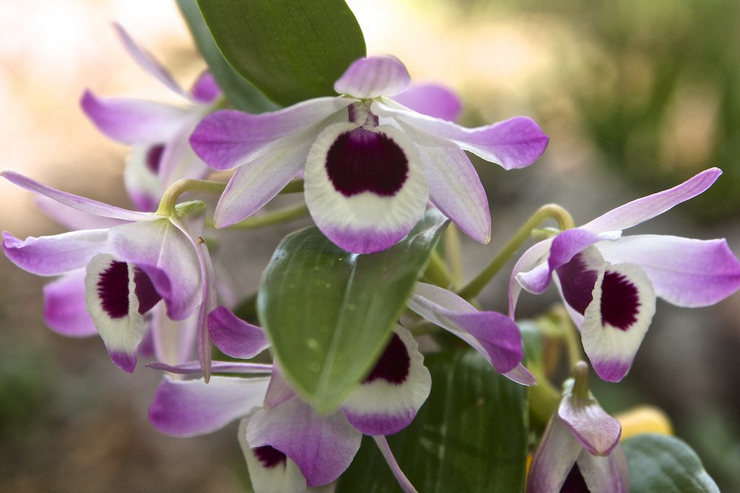 For growing at home, it is recommended to choose those types and varieties of orchids that belong to perennial plants. Such species do not require special and complex care and maintenance. They can thrive indoors for many years, and their bloom will be full and inviting every time. There are the most popular indoor orchids, which experienced florists recommend purchasing.. 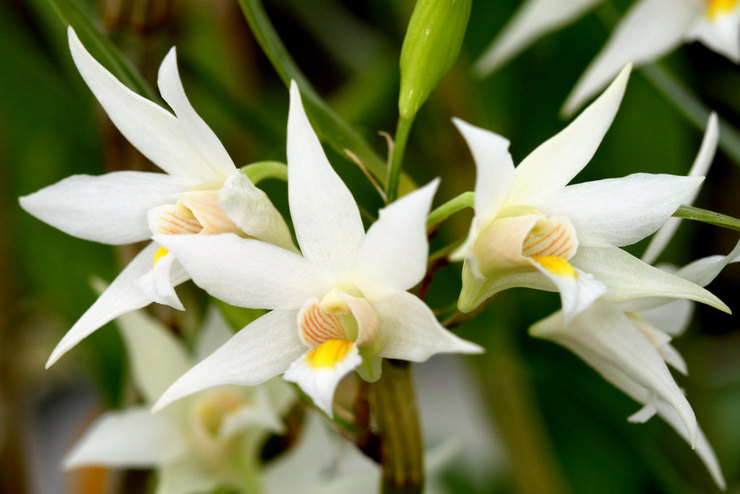 Dendrobium has over 80 different species. The most common of them for growing at home are noble dendrobium, twisted dendrobium and phalaenopsis. These types of orchids can be grown without soil, in special nutrient solutions. Plant care consists in proper watering and lighting, as well as in the required temperature regime. During the period of active flowering, the flower should be exposed to a sunny place, and during the dormant period, it should be reduced to a minimum of watering. In order for the orchid to bloom, it is recommended to create a temperature for it no more than 15 degrees Celsius at night.. 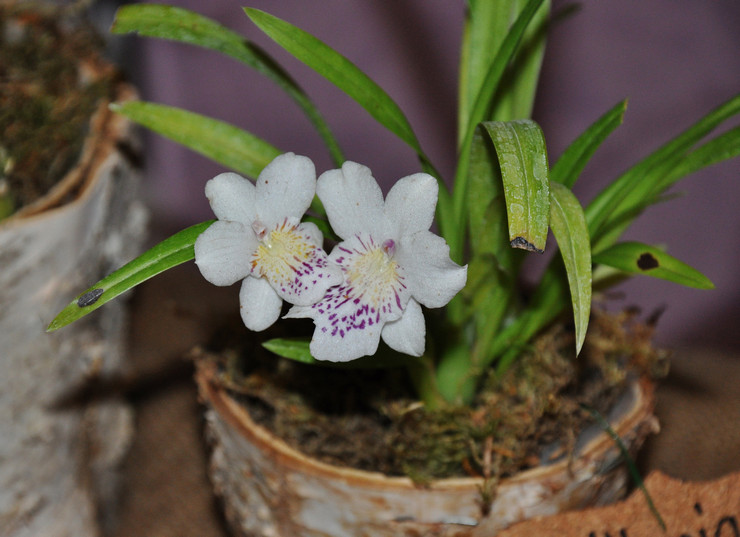 Miltonia has several species, which can be divided into thermophilic plants (Brazil is considered their homeland) and cold-loving plants (they were born in Colombia and are considered very demanding and capricious). Plants need high air humidity and frequent ventilation. In the cold season, you need to reduce the volume and frequency of watering, as well as change the place of cultivation (rearrange, for example, to the northern part of the house). Direct sunlight is not recommended during the flowering period. 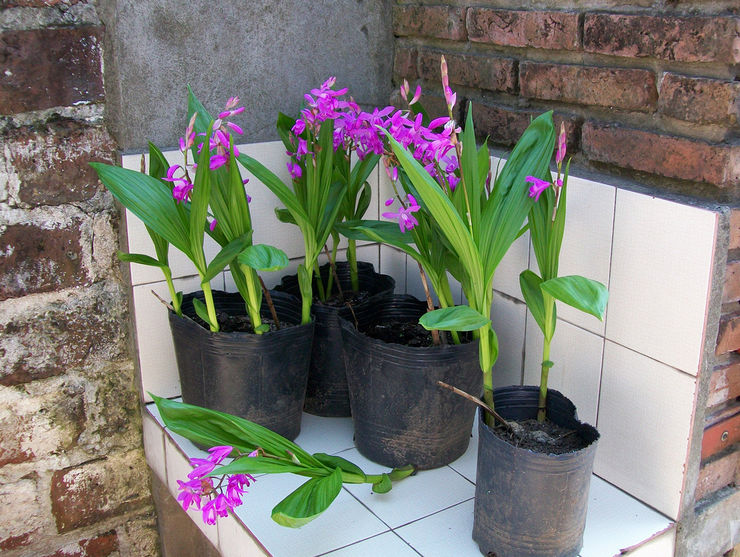 Bletilla hyacinth requires a special approach in the spring-summer and autumn-winter periods. In autumn, the plant must be prepared for a dormant period – transfer it to a bright, cool room with a temperature of 5 to 12 degrees after the shoots and leaves die off. If you do not create such conditions for the flower, then flowering will not come in spring. In the summer months, the orchid flower pot is recommended to be watered abundantly and kept in an open, sunny place.. 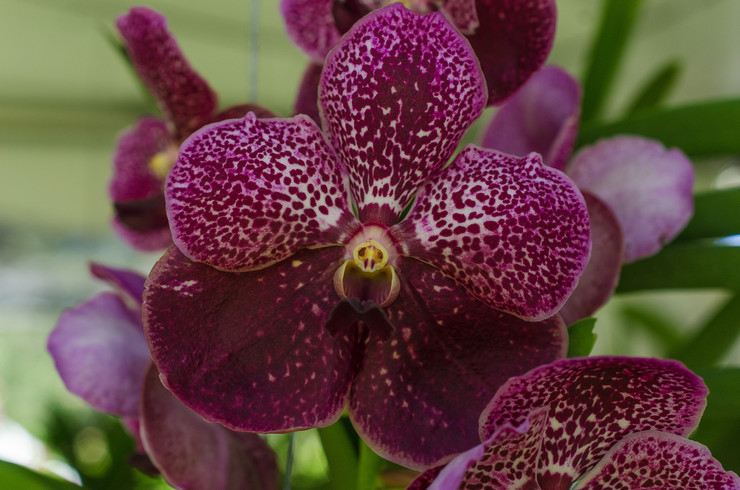 Wanda is a thermophilic, large and capricious orchid species. Wanda blooms magnificently and for a long time, several times a year, but only if the rules of care are followed. The plant just needs a lot of sunlight for as long as possible. It is very important for him to have a high level of humidity and high temperatures. It is recommended to keep the orchid in a bright and warm room so that the air temperature does not drop below 15 degrees. The flowering period lasts almost 6 months (autumn and winter). 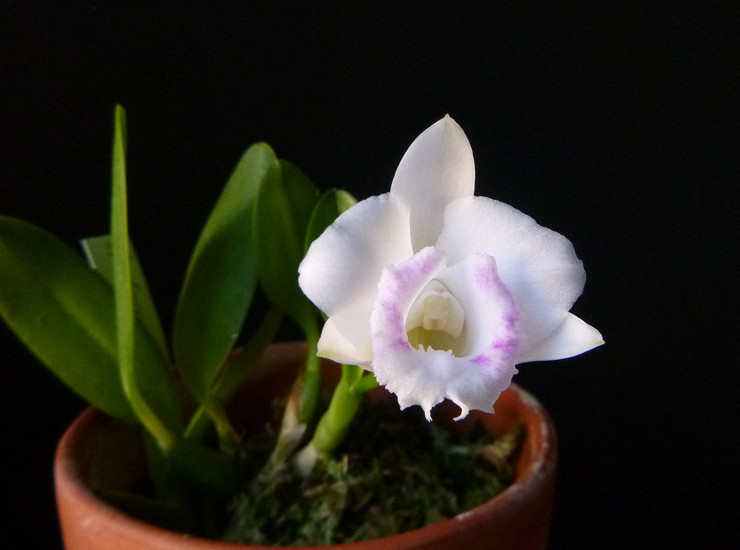 Lelia is the most unpretentious and easy to care for orchid. Watering is carried out daily plentiful – in the summer and moderately minimal – in the rest of the months. The temperature of the content is from 18 to 25 degrees – in the warm season and about 15 degrees – in the winter. Orchid can be grown on a southern windowsill. 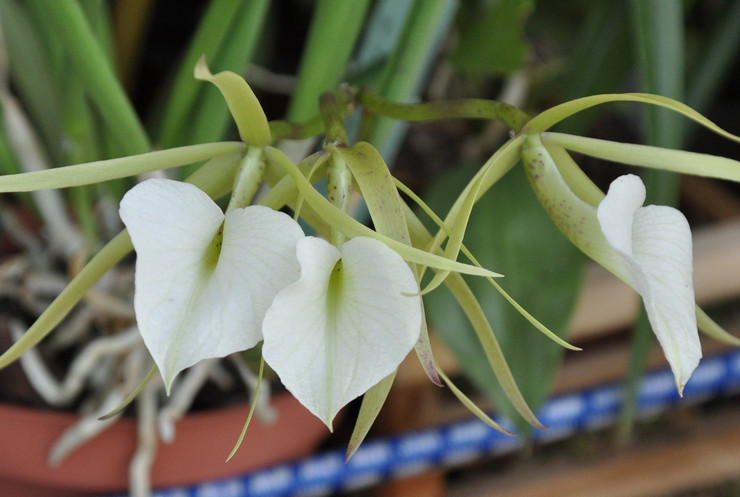 Brassavola has more than 50 different species, but they are all unpretentious and undemanding. They need bright and long-lasting lighting, but without direct sun (especially at noon), the air temperature in the daytime is 20-24 four degrees, at night it is cooler – 16-18 degrees. Watering is plentiful in summer, 1-2 times a month in winter. Watering is reduced after flowering ends and during dormancy.. 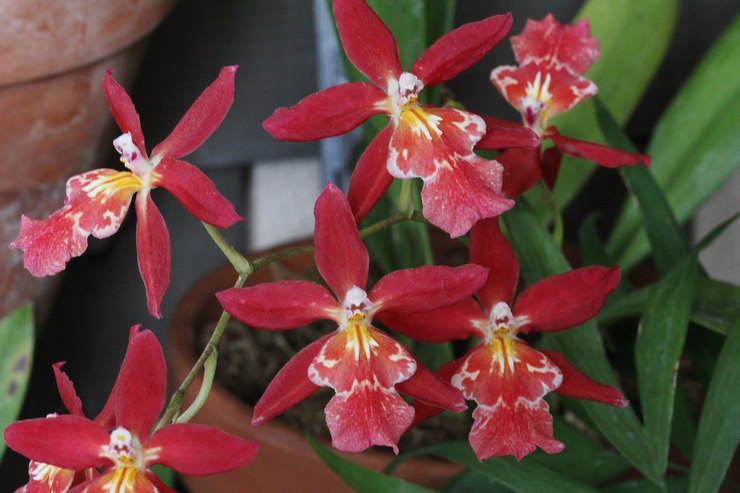 Wilestekeara is a hybrid cultivar, artificially bred by crossing the three best species. The flowering plant looks like a lush, fragrant bush. Leaving is uncomplicated. In the summer, you need abundant watering and diffused partial shade lighting in the open air. In the autumn months, it is recommended to place the orchid for about 15 days in a room with a lower temperature (10 to 12 degrees). This will encourage re-blooming around the end of February..

In winter, the place of cultivation of the wilestekara is a windowsill on the eastern side of the house, the temperature regime is 20 degrees Celsius, daily spraying is needed (without moisture getting on the flower buds) and minimal watering. 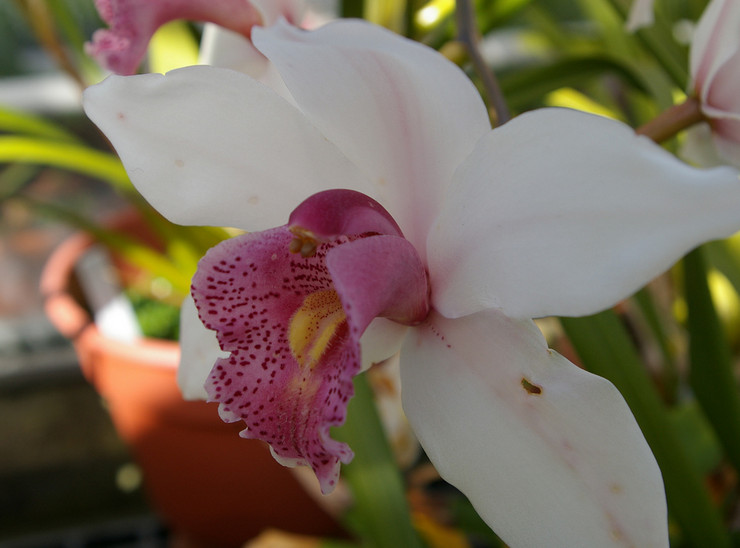 It is recommended to grow cymbidium hydroponically, as the orchid prefers high humidity and frequent spraying. This undersized miniature species feels favorable outdoors until the thermometer drops to 7-8 degrees Celsius. Abundant watering should be continued until flowering begins, then slightly reduce the frequency and volumes. 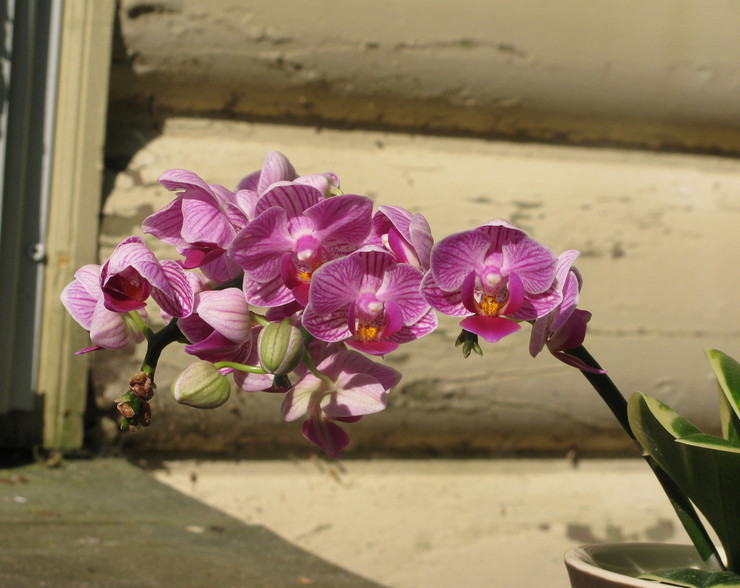 Phalaenopsis has a second name “butterfly orchid” and is common on forest soils in tropical climates. Even beginner growers will be able to grow an orchid at home. Watering is carried out in moderate amounts throughout the year after the topsoil has dried by 1 centimeter. Water during irrigation should not fall on the stem and root of the plant. He loves bright sunlight, except for the burning midday sun, and the temperature regime is from 18 to 25 degrees throughout the year. The rest period lasts about 3 weeks in a bright, cool room. 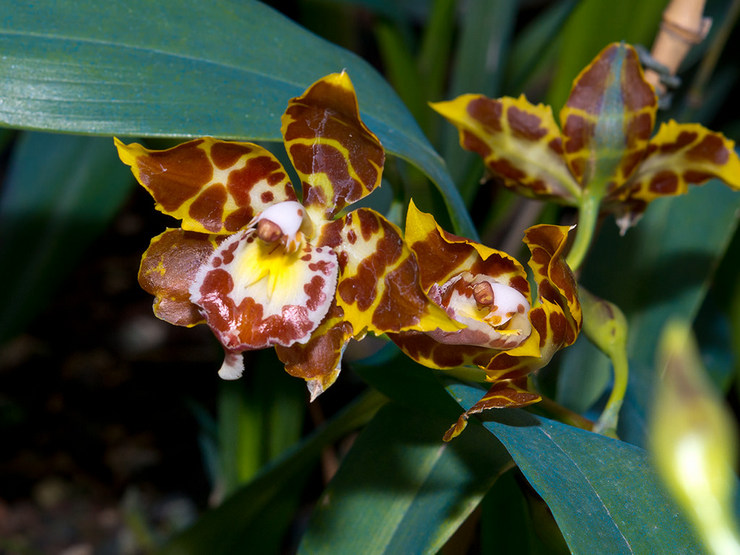 Odontoglossum is an orchid that blooms for a long time during the winter months. In care, the plant is very capricious and demanding. After the end of flowering in the summer, it is recommended to keep it in a shaded place with regular watering and dressing. One of the difficulties of keeping is to ensure that the air temperature is 5 degrees Celsius at night.. 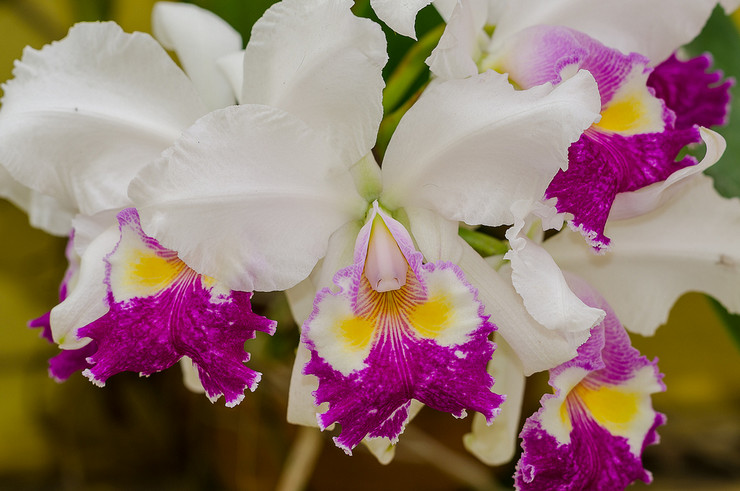 Cattleya is one of the most beautiful orchids with flowers with several shades at once. Breeders have bred several thousand different Cattleya hybrid varieties. Flowers of this species are used to decorate churches and holy Catholic places during religious holidays..

Cattleya care does not change throughout the year. The temperature of the content is room temperature, the lighting is bright diffused, the air humidity is high. It is recommended to promptly remove wilted and faded inflorescences after the end of the flowering period. 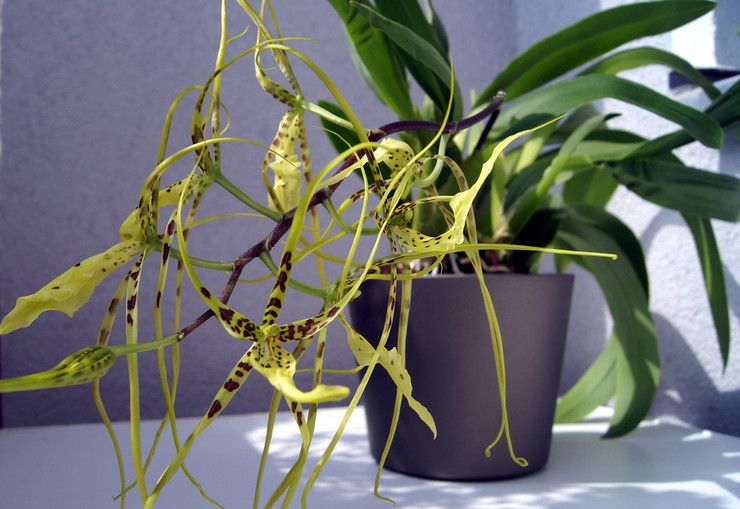 Brassia warty is one of three dozen orchid species that have adapted to home conditions. Its beautiful flowers, as if covered with wax, emit a pleasant and unique aroma. Flowering continues for 3-4 months. Prefers sunlight, but no direct sunlight. During the rest period – watering is minimal, the temperature is about 15 degrees, daily airing of the room. 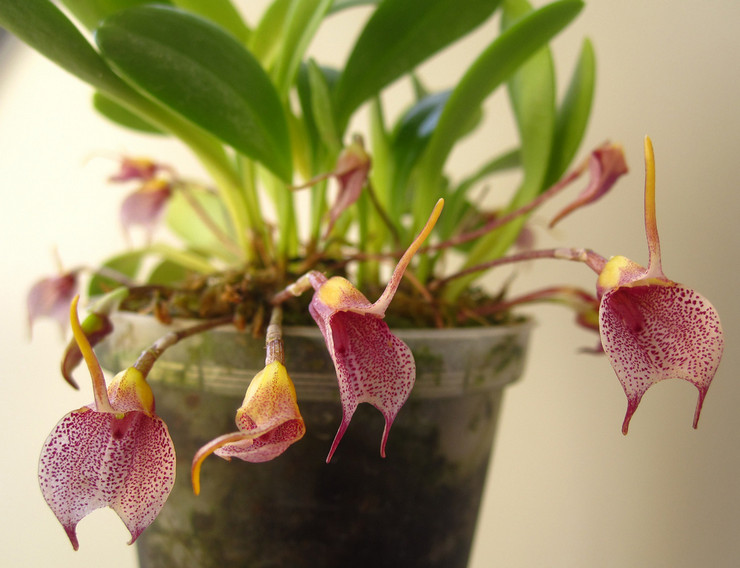 Masdevallia is a compact orchid species with lush and vibrant blooms. The plant belongs to cold-loving varieties. In spring and summer, it prefers to be kept in shade, cool temperatures and high humidity. In autumn and winter, it can be in a cold room, without watering, but the air humidity must be maintained at a high level.

Problems and difficulties in caring for orchids 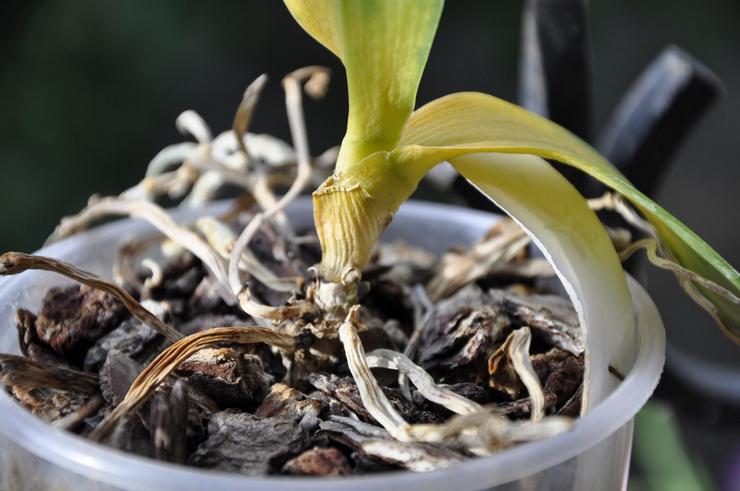 How to prolong the flowering of an orchid (video) 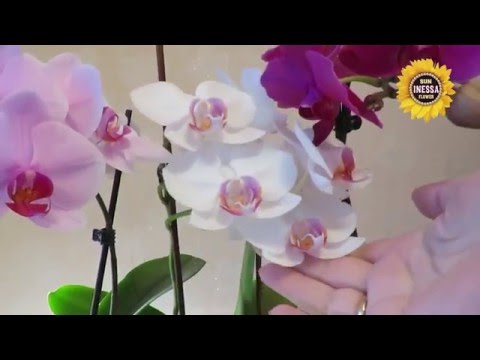