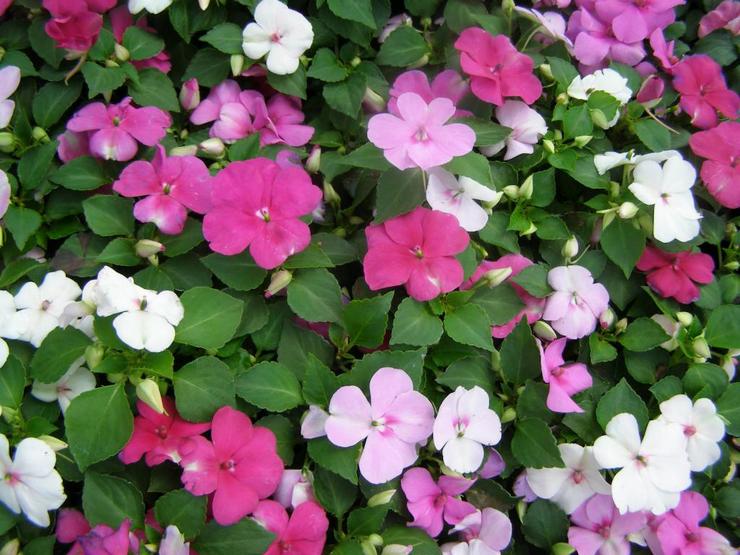 Waller’s balsam plant (Impatiens walleriana) is a representative of the Balsamin family. It is also called impatiens. In nature, balsams live in the African and Asian tropics. They came to European countries at the end of the 16th century..

Balsam is sometimes called “water fuchsia”. Another name for the flower – “Vanka wet” – is associated with its peculiarity to release droplets of juice during periods of high humidity – after watering or shortly before rain. Drying, the droplets turn into sugar-like crystals. This feature allows the balsam to protect the pollen from ants.. 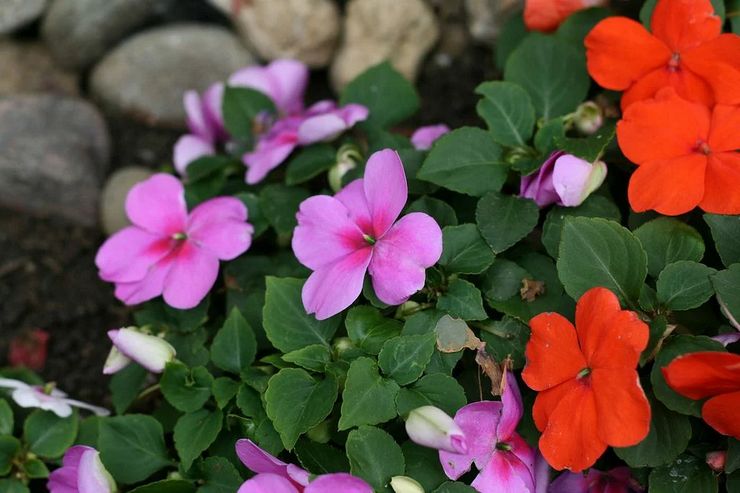 Waller’s balsam is a perennial bush up to 60 cm in height. Its foliage has a deep green or slightly reddish color and jagged edges. All parts of the plant are quite delicate and fragile. During flowering, single flowers bloom on the bush, which can be simple or double. The palette of their colors includes many color shades, the only exceptions are blue and yellow..

After the flowers wither, fruits appear in their place in the form of bolls, which contain many tiny seeds. It is precisely with the quick opening of such boxes from touch that one of the official names of the plant is associated – “touchy”. The blooming period of Waller’s balsam usually begins in the spring and lasts until winter. At the same time, due to high growth rates, even plant seedlings can bloom in the current season.. 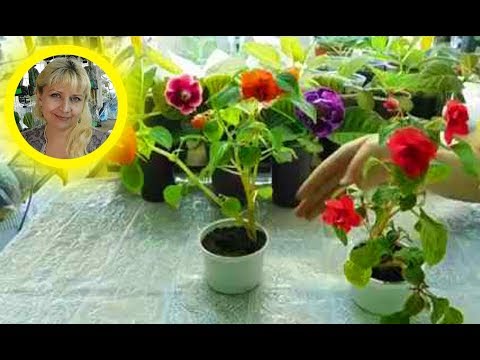 The table shows brief rules for caring for Waller Balsamine at home.

The plant is quite vulnerable to pests, and also does not tolerate a sharp change in temperature..

Caring for Waller’s balsam at home 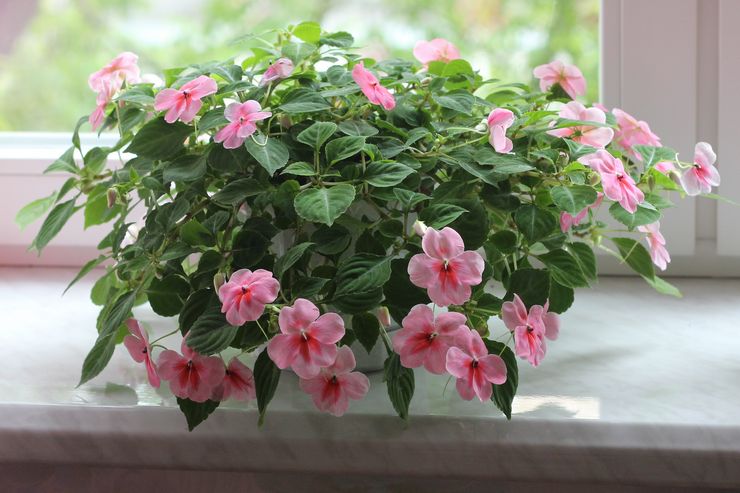 Waller’s balm is one of the undemanding indoor flowers. But at the same time, it is necessary to adhere to the basic conditions of growing at home..

Waller’s balsam appreciates the sun, but the bushes should be sheltered from direct scorching rays. For a container with a plant, oriental window sills are optimal. In this case, in the morning the bush will be well lit, and in the afternoon, in the sun, it will be in partial shade. There are also more shade-loving varieties. In winter, some balsams may need additional lighting. Illumination is reduced only during the rest period of the plant..

A not too high temperature is best for balsam: within 21-25 degrees. In this case, the flower is recommended to be kept indoors, where drafts do not penetrate. In summer, the plant can be placed on a moderately lit balcony, and in winter – in a cool and not too bright room, where it keeps no more than 15-18 degrees.

If the flowers were grown in the open field, in order to preserve the plantings, cuttings should be cut from them in advance. Such bushes do not tolerate a transplant into a pot.. 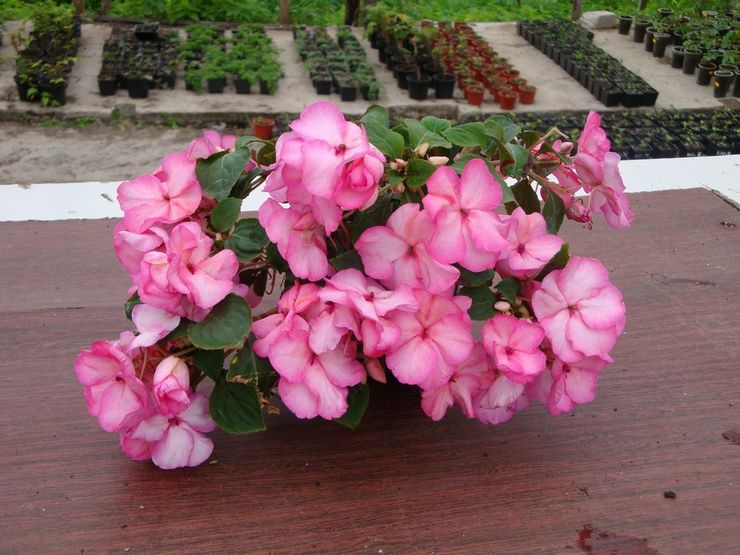 They try to constantly keep the soil lump moist. Drying out of the soil can lead to the fact that the bush will drop the formed buds or the edges of its foliage will begin to dry out. In winter, the amount of watering is slightly reduced, but overdrying is still being avoided..

Watering the plant is only necessary with soft water. In addition to settled water, you can use rain or melt water, preheating it to a slightly warm state.

The shrub prefers a high humidity level. It is possible to achieve the necessary indicators in the summer only with the help of constant spraying of its foliage. For balsam, soft, previously settled water is suitable. The spray bottle should be directed at the ground and foliage, being careful not to let the drops fall on the flowers..

In order for the Waller balsam bush to regularly delight with its flowers, it should be grown in a moderately cramped pot. For an adult bush, the size of the container is about 17 cm. In such conditions, the forces of the plant will be directed to bud formation, and not to root growth. A small pot will also help protect the roots of the flower from waterlogging: the soil in them will dry out faster.. 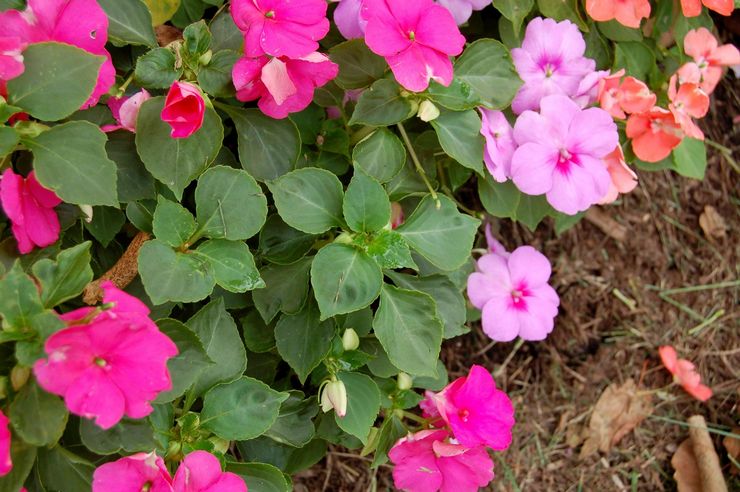 Waller’s balsam is undemanding to the composition of the soil, the bush can grow well in a universal soil. At the same time, a slightly acidic substrate is considered ideal for flower development, including turf, sand and three parts of leafy soil. At the bottom of the container, drainage from expanded clay with the addition of charcoal up to 5 cm thick must be laid.

For Waller’s balsam, liquid mineral formulations including potassium and phosphorus are suitable. Top dressing is applied during the growing season of the bush about three times a month, along with watering or foliar method. Organic compounds should not be used, they can lead to decay of the plant’s rhizomes. It is worth refraining from fertilizing only if the bush is dormant or sick.

At the same time, an excess of mineral fertilizers will not benefit the plant. To avoid this, it is worth using a dosage 2 times less than the recommended one.. 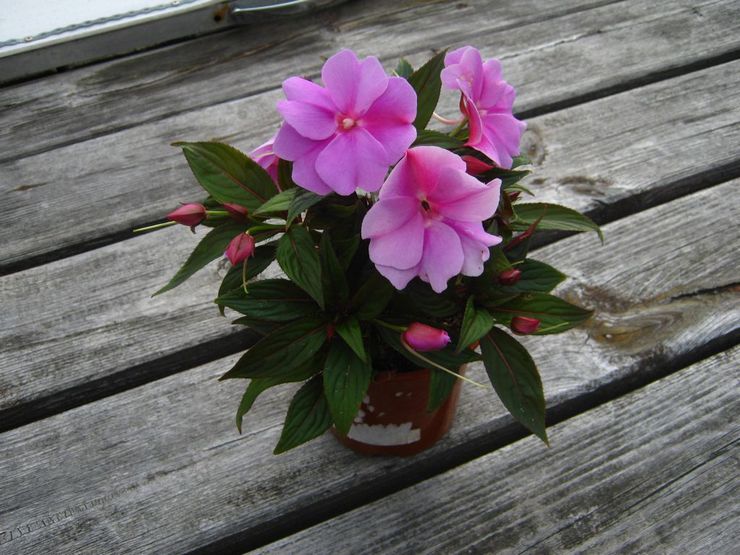 Waller’s balsam is transplanted as needed, when the roots of the flower no longer fit in the pot. They are carried out in the spring before flowering. If the budding period has already begun, you should not disturb the plant: the balsam can throw off all the buds and slow down the pace of development.

The bush is moved to a new place, carefully rolling it over. The voids in the pot are filled with fresh soil. The root collar should not be buried during transplantation. If the roots are damaged, the cuts should be sprinkled with ash or crushed coal. The transplanted plant is watered and placed in a shady place. You can return it to its usual place after about three days..

Together with the transplant, you can also prune Waller’s balsam. This will help make the bush look more neat by giving it a spherical shape. In addition, the procedure helps to stimulate plant growth and bud formation. The resulting cuttings can be used to propagate balsam.

During the entire period of growth of the bush, knocked out or bare branches should be pinched. Each shoot should have about 3 buds. 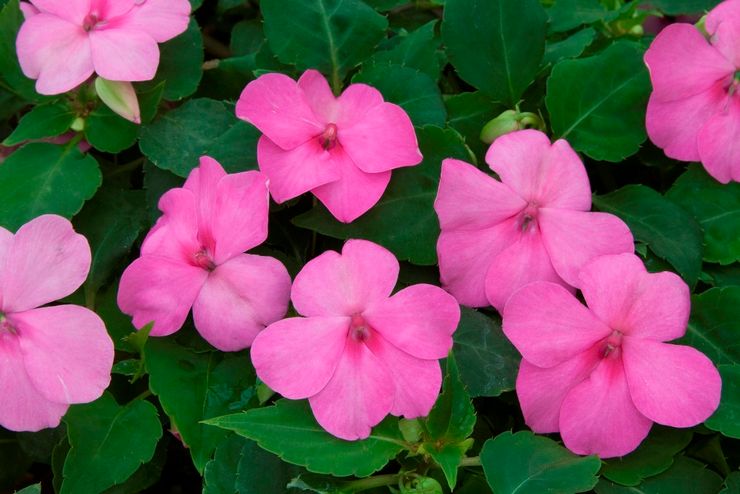 Subject to all the conditions for growing Waller’s balsam, the bush will bloom almost all year. The buds begin to appear on it already in the first spring months, and the plant fades away only by December. The size and color of the flowers may vary. On average, the diameter of each flower is about 5 cm. Most often they are located one by one, but they can form inflorescences in the leaf axils. Sometimes the flowers have spurs or noticeable long pedicels. In addition to indoor cultivation, this plant is often planted in open ground. In this case, the bushes are cultivated as annuals..

Sometimes balsams are used as ampelous plants and are grown in hanging containers or tall flowerpots..

The presence of a dormant period depends on the climate of the region where Waller’s balsam is grown. In warm areas, it can bloom for a whole year without a break, but in other cases, with the onset of cold weather, the plant stops forming buds and goes to rest. Usually this period occurs in the winter months and lasts from the second half of autumn to February. At this time, it is recommended to keep the bush in a moderately shady place at a temperature not exceeding 18 degrees. The plant should be watered a little less often. Top dressing and spraying is not carried out at all. 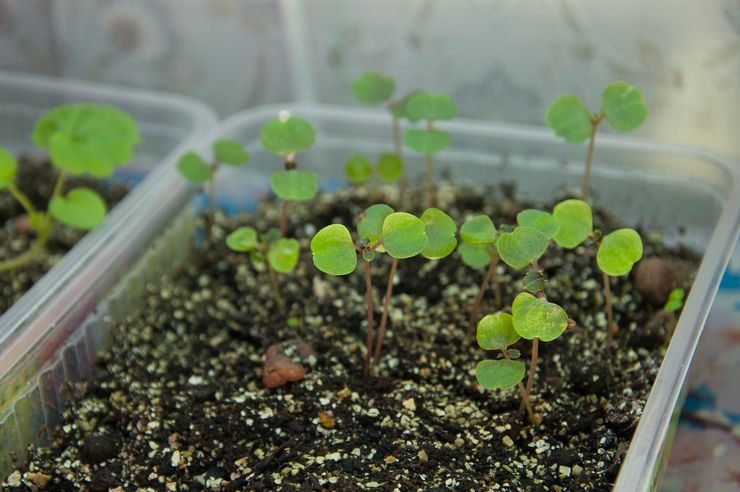 Waller’s balsam seeds are arranged in capsules that crack easily after ripening. Seed germination is maintained for a long time – up to 8 years.

Before sowing, the soil should be disinfected and sieved. For balsam, a mixture of sand with peat or garden soil is suitable. The best time to sow is mid-spring, but some hybrid varieties can be sown as early as January. In order for the plants to bloom by summer, sowing is carried out in the first days of March. Flowering occurs approximately 2.5 months after sowing.

The seeds must first be soaked in a solution of potassium permanganate for about 10 minutes, and then rinsed with lukewarm water. The soil substrate is placed in a medium-sized container. In order not to erode the ground, it is not watered, but lightly sprayed. The seeds are spread over the surface of the substrate, slightly pressing and maintaining a distance of at least 3 cm between them. You can not fill the crops on top, or use a thin layer of sand or sifted soil. After this, the seedlings create greenhouse conditions by covering the containers with a bag or glass..

Seedlings should appear within 1-2 weeks. When a pair of true leaves forms on the seedlings, they dive. As the seedlings develop, you can pinch.

A week after the pick, the seedlings can be fed. 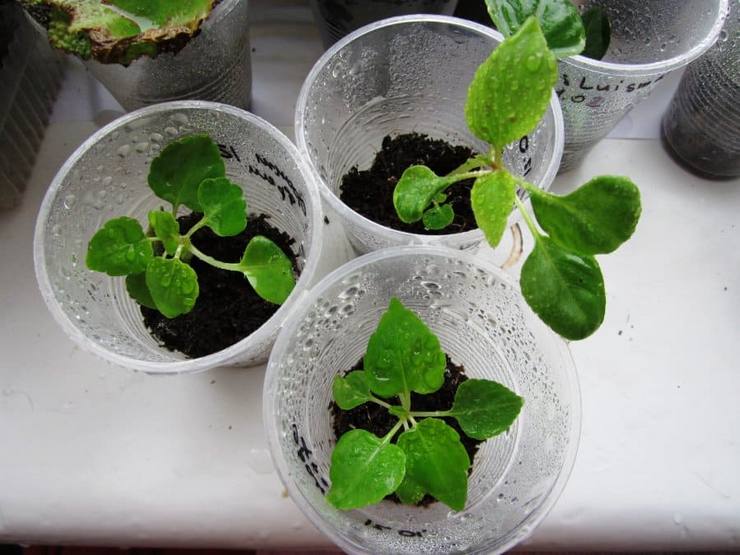 Cutting allows you to get the finished plant the fastest. To obtain cuttings, use the remaining parts of the stems from pruning. The size of the cutting should be about 7-10 cm. Most often, cuttings are carried out from late spring to late summer, but in principle this can be done almost all year round. Sometimes, for convenience, a healthy plant is placed in the shade for a while. When the bush forms a pair of elongated shoots, they are cut off and placed in the water for the development of roots..

The resulting seedlings are placed in individual containers filled with slightly acidic soil. If rooting was carried out in the summer, such specimens can continue to bloom even during the winter months..

When cutting balsam in autumn or winter, it is worth considering that young seedlings will need a lot of light for full development. In this case, to get a beautiful bush, you will have to use the backlight.. 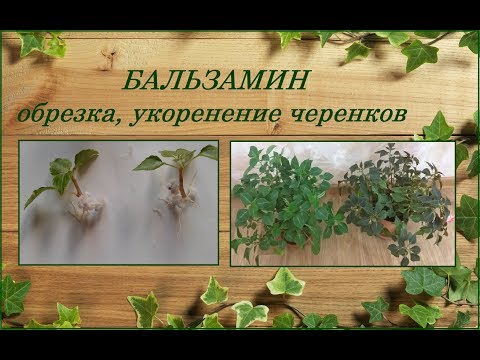 Some of the most common problems with growing Waller’s balsam include:

Thrips, spider mites, as well as aphids, false scale insects or whiteflies can harm the bushes. You can fight them with folk remedies or special drugs..

Varieties and hybrids of Waller’s balsam with photos and names

Balsam Waller (Waller) served as the basis for the creation of a large number of hybrid forms. It is the Impatiens walleriana hybrids that are often used to decorate gardens and apartments. Such bushes can be grown as ordinary or ampelous plants. They bloom profusely and for a long time, form 5-petal axillary inflorescences and have leaves no more than 12 cm long. 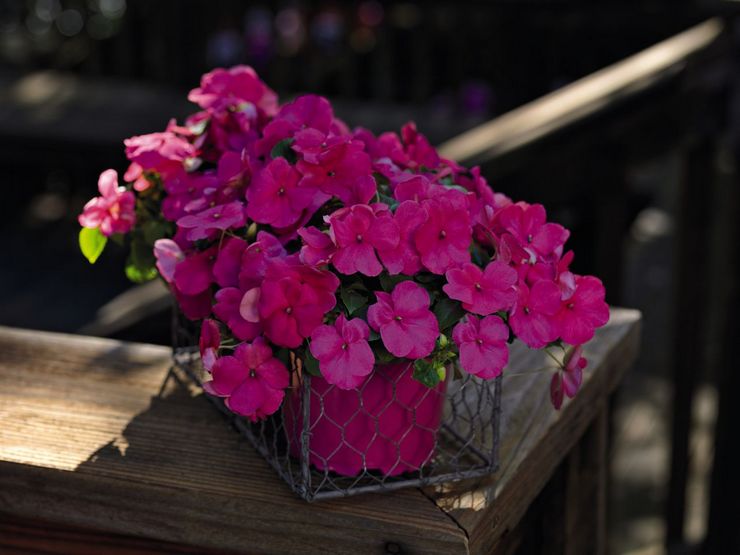 Among the most popular varieties of such a plant: 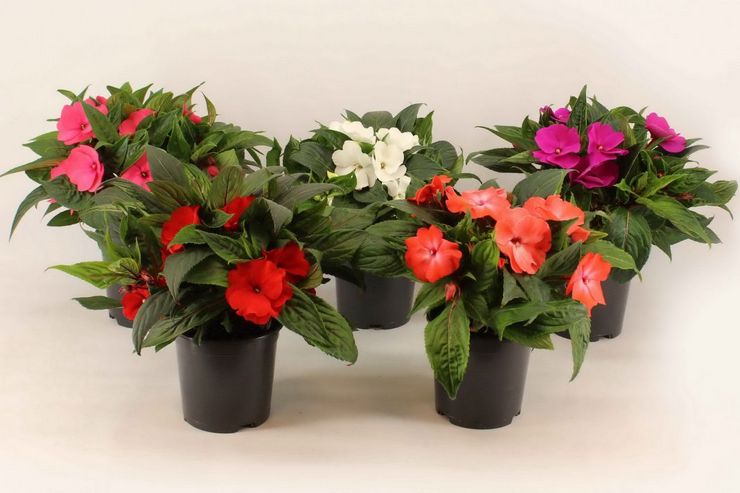 Hybrid form of Waller’s balsam. Bushes grow up to 30 cm in height. The flowers of such balsam are especially large – up to 8 cm – and have spurs.

Among the well-known series of varieties: